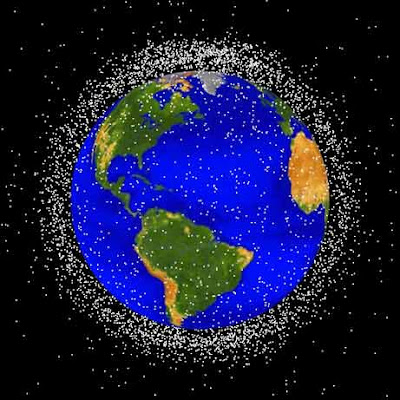 Ninety-five percent of the objects represented by white dots in this computer-generated illustration are human-made debris.
Image courtesy NASA

I just had to write about this after I saw it on the news all over the world.

Two communication satellites – one Russian, one American – have collided in space some 800 kilometers over 400 miles, above Siberia.

The collision occurred on Tuesday, creating a massive explosion with much debris scattering through space. It’s still unclear what caused the collision, which has become the first-ever involving two intact satellites.

The incident is thought to have involved a 12-year-old satellite belonging to the US company Iridium and a defunct Russian Cosmos satellite that was put into orbit in 1993. The craft, which weighed 560kg and 950kg respectively, apparently smashed into each other at a speed of 420 miles per minute (25,000mph). Both satellites were used for telecommunications, with the US satellite an active part of Iridium’s network of 66 craft which provide satellite telephone access to more than 250,000 people worldwide. It’s the first crash of its kind, but NASA says it doesn’t pose a threat to the International Space Station (ISS).

Now that would have been something to see. At that speed the satellites would have just exploded like they were detonated.

Guess this will now increase awareness of the orbiting satellites and what dangers they could be to each other and the space station. Since some 6,000 satellites have been sent into orbit since 1957 and around 3,000 still remain in operation, according to Nasa.

PS: Strange thing about this news though is that no one tried to change the news and put a biased slant to the article. Everyone reported the news the same. 🙂