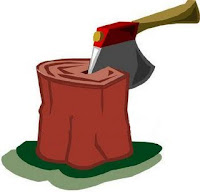 Georgia is really in a tissy over this one. South Ossetia caught 16 Georgians cutting lumber on their territory and the Russians have them in custody. Georgia is demanding immediate release of the woodcutters. Now what Tbilisi is not expressing very loudly is that they caused the problem.

As is known in this part of the world, Georgia regards the border with South Ossetia to be administrative only and considers any and all the natural resources of South Ossetia to be its own. The land in the frontier zone have many times been the reason for armed conflict situations.

So Georgia has been announcing that:

“Any Georgian has got the right to cross the border now as it had been before last August when the Akhalgori region was under control of the Georgian authorities and was part of the Mtskheta-Mtianeti region.” (Link)

This in effect caused a confusion to the woodcutters. They really think that they have a right to go to South Ossetia and cut all the wood they want.

Well maybe not – but it sounds good!

“Russian border guards detained 16 citizens of Georgia, who illegally chopped valuable woods in the territory of South Ossetia, – the diplomat informed. – The woods subsequently were directed to the furniture factories in Georgia “.
MENU