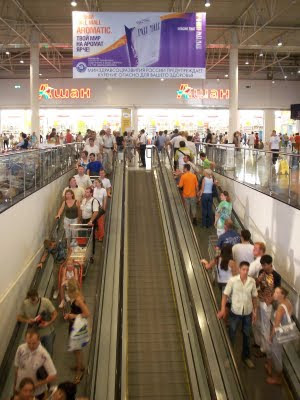 Here in Russia the rumors of Wal-Mart breaking into the Russian market always float around. But the truth is: Russia has a fantastic retail giant called Auchan. I have been a Auchan fan since moving to Russia. It has the feel of Wal-Mart back when Sam Walton was still alive. A company that put people first…

Quick, what’s France’s answer to Wal-Mart? Until now, it has been Paris-based Carrefour, the global No. 2 retail chain. But increasingly, another French retailer, Auchan, is giving both Carrefour and Wal-Mart a run for their money.

Over the past decade, Auchan (pronounced oh-shon) has expanded rapidly into China, Russia, and Eastern Europe. Based near the northern French city of Lille, the privately held company is now the world’s 14th-biggest retailer, with 1,200 stores in 12 countries and annual sales of $59 billion. (Link)

Just a few weeks ago Carrefour pulled out of Russia after a short try at going head to head with Auchan. Carrefour found that Auchan was a powerhouse in Russia just like they are finding the same in China. The picture above is from our collection of photos and believe me – This is what a Auchan looks like all the time when open.

Auchan reports that they have received a slight drop in sales but have maintained growth. This is a fact because Svet and I are avid Auchan fans. As of this writing I would say that Auchan has started a new growth period, because the stores are busier than I have ever seen them.

One thing that makes Auchan a favorite for me is that they have bought the home-improvement chain Leroy Merlin and I am here to tell you Leroy Merlin has it all for home improvement. Home Depot lovers would turn their heads and look twice.

What does Wal-Mart have in competition if they try to break into Russia? They might find the same thing that happened in Germany where Wal-Mart failed… (Russians like their Auchan)