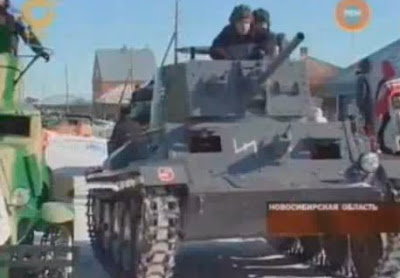 This is a great video and I wish it was in English. (The video that I found in English was terrible.) So lets watch a video about an off road race that included a few tanks.

These tanks were hand built from spare parts (don’t ask what parts) and were very underpowered. They are not real tanks, not even of correct size and no real guns, but they function like a tank. These tanks won the race as all the other 4×4’s were buried in up to a meter of snow. The tanks just kept on going. A young man in video said it was all good and everyone had fun!

From what I understand about this event, the regional officials kinda gave the man who built them the third degree. For the tanks are not registered for the road. As he says he has no plan to register them because they are not going to be used on the roads.