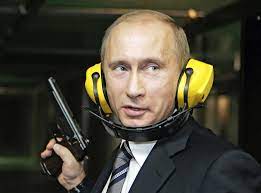 So I can imagine Boris, Ivan and Olga (Putin anyone?) the Russians stood outside the White House with a state of the art Ray Gun zapping passing citizens and watching the people run away clutching their heads in agony… ~~

So the Russians must be sanctioned for this atrocity….Wait a minute, they don’t know exactly what the symptoms are or how they occur but it must be a evil demon Energy Ray from the Russians!

A government-commissioned report provides the most definitive explanation yet for “Havana syndrome,” which struck scores of American employees, first in Cuba and then in China, Russia and other countries.

Ex-CIA officer Marc Polymeropoulos believes he was targeted while on a visit to Moscow.