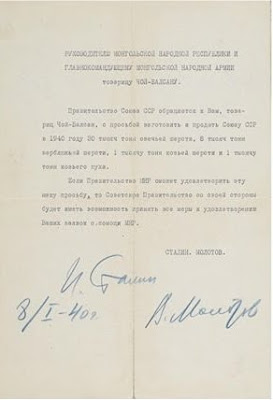 Sotheby’s is having an auction. Now that is not unusual news, but one of the items for auction is an attention getter…

Stalin in return promised to take all the efforts and help necessary to satisfy assistance requests from Mongolia. (What ever that was meant to mean?)

The auction house says the letter is proof that the Soviet Union planned to invade Germany in harsh winter conditions – something which has been undiscovered by historians before.

OK – cool but do you believe it or is Sotheby’s just stirring up interest and stretching the facts some?

Does Sotheby’s have that much expertise?