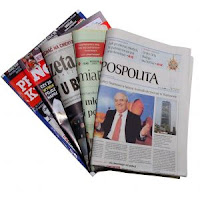 Police officer who killed south Russia journalist gets two years:
A court in the southern Russian republic of Ingushetia sentenced a police officer on Friday to two years in prison for killing a journalist in 2008. (That is all!)

Russia’s GDP down 8.9% in 3Q09 year-on-year:
Russia’s GDP fell 8.9% in the third quarter year-on-year and grew 13.8% on the second quarter, the Federal Statistics Agency said on Friday.

Two more nightclub blaze victims die, toll climbs to 141:
Two more victims of a Russian nightclub fire died on Friday bringing the death toll to 141 people, a spokesman for the governor of the Urals Perm region where the tragedy happened said.

Russia, U.S. to continue arms cut talks in Geneva next week:
Russia and the United States will continue talks on a new nuclear arms reduction deal to replace the expired START 1 treaty in Geneva next week, a Foreign Ministry official said on Friday.

Why Russia doesn’t care about Copenhagen?:
The rest of the world’s passions may be boiling over in Copenhagen this week, but Russia is paying no attention. There is a widespread opinion among the Russian ruling elites that global warming could be beneficial to Russia.