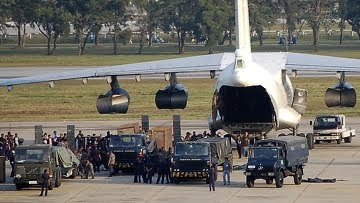 Aircraft with weapons, detained in Bangkok, belongs to Georgia:

On December 12th an aircraft with weapons was detained in the airport of Bangkok. The world immediately announced that North Korea was at fault. As it turned out, it belongs to a Georgian air company – RIA Novosti.

“The aircraft belongs to Georgia, previously it was in the register of Kazakhstan, but on October 7th 2009 was sold to a Georgian air company and excluded from the register in Kazakhstan,” said Radilbek Adimolda from the Ministry of Transport and Communications of Kazakhstan.

The aircraft Il-76 contained 40 tons of weapons, including grenade launchers and portable missile launchers. Weapons were transported under the guise of “well drilling equipment”!