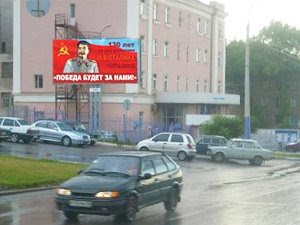 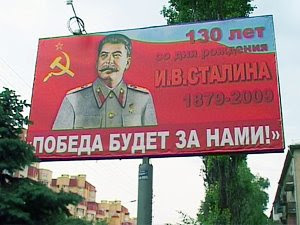 This is stirring up a issue in Moscow, Russia today and some people are having issues with a new billboard…

Billboards with the face of Communist leader Joseph Stalin have appeared on the streets of the city of Voronezh in Central Russia.

The dictator’s return is due to the Communist Party, who bought ten advertisement panels throughout the city, paying 8,000 roubles (around $260) for each one, Nezavisimaya Gazeta reports.

The campaign was launched on June 22, the day Russia commemorated the victims of the Great Patriotic War. On that day, the German Nazi forces suddenly invaded the Soviet Union without a declaration of war.

The Communists say it is dedicated to the 130th birthday of Stalin, celebrated this year on December 6 2009.

The dictator’s image appears in front of a red flag and accompanied by a slogan: “The victory will be ours”. (Link)

I found this interesting and wondered what others think of this advertisement ploy by the Communist Party?