Today I’ll tell you some folk traditions of fortune telling in Russia. It starts at Christmas Eve (January 6th) and ends with the Epiphany (January 19th). In old time people believe that’s that on those days souls of dead ancestors wander around the world and check if their children and grandchildren lead righteous lives. And if someone would start talking to you through the window, you should answer him very politely, but you should not open the door: it is a spirit; people go through the door… At the Christmas Eve people believe there are two strengths in these days: Strength of Kind and Strength of Evil. And to what strength you join, the strength will make wonder with you!..

During these two weeks, people think a good time to find out about the future. Even the Russian Church does not consider this, like a sin.

There are some old folk fortune telling. They are most for girls who wants get married:

At midnight girls go out to a crossing and draw a circle in the snow with a burnt stick, and bend to the ground they try to hear the sound of a bell, or an underground bell. If she heard the sound of a bell it meant that she would get married this year.

To learn the color of the eyes of the fiancé they used such a fortune telling. At midnight girls 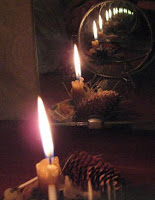 used to go out with ‘sochen’ (a cottage cheese pie); they went wherever they liked to share the pie with the first person she met and to eat it. What the color of this person’s eyes was, the same color her future fiancé eyes will be. If she asked his name, she could learn the name of her future fiancé.

A girl who wants to see her fiancé could do it in such a way: A girl sits in dark room at midnight, she has two mirrors at the table what face each other lightning candles and tries to see a some one in the gallery of reflections.

If you want to know if this girl and this guy will be together: you put two matches on each side a matchbox and set a fire. If the burned down heads of the matches will be turned to each other, that means this guy and the girl will be together.

Here I told you just very little part of Russian folk fortune telling. When I was writing this article I learned a lot about the traditions. Some of them I never knew about but some of them I know from my childhood and we even tried them with my classmates ;).

Do you know some folk fortunetelling? Do you believe in some of them?