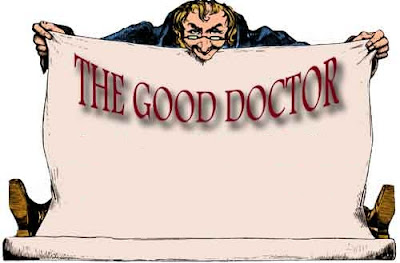 Hello,Today I want to tell you a little bit about my Uncle! Really, I could a lot about him: he is a PhD in Geophysics, he use to travel a lot, he read a lot, he wrote several books and he is a very interesting person. Because of him I write you my stories in English now because one day he told me that every person who considers himself as well educated must know at least one foreign language. And since I respected my Uncle a lot I started to study English again… already after University! But that is another story which I might tell you in the future. Today I’ll tell another story about my Uncle.

Right now my Uncle is a 75 year old gentleman who has rather big heart problems, he had surgery done and now he gets a heart treatment/therapy. Recently I’ve visited him at home and he was in good mood and told me this story…..

Once at 4 pm, my Uncle got a call. He was told that they called him from his clinic and that he got a grant for 800,000 rubles [$32,000] from Moscow Government to treat his heart illness in a special medical center. So they said, right now he needs to call to the center and tell them number of his grant (several digits and letters what they told him) and that yes, he wants to take part in this program.

Uncle was very interested in it and called them immediately like he was told. A young lady on the other end of line spent some time looking for information about my Uncle’s “grant” and she found it (Surprise, surprise!), she asked my Uncle not to engage his phone line because a doctor from this center will call him soon. In 10 minutes a man called him and told that he is Doctor Blagonravov and he wants to discuss my Uncle’s heart problems. Uncle started to tell about his health, but when this “doctor” told that blood pressure 160 is not much, my Uncle got his first warning…

Than the “doctor” changed theme rapidly and told that a man would visit my Uncle tonight and my Uncle would sign papers. All he needs to have is ID documents and 17,000 rubles. My Uncle just asked, “Do I have to give money to a person whom I never seen before?” This “doctor” told that the money must be paid today before 6 pm, and if my Uncle does not want to pay a courier he needs to go some address that was given to him by this Doctor. My uncle looked at the clock and told the Doctor “Ok, I will be on time!” He hung up and call 02 Militsiya.

Militsiya arrived pretty soon they wrote down all this story and thanked my Uncle. My uncle thanked them and asked them not to bother him, because he is an ill person and he needs peace and quiet and he did his civic duty!

Of course, it would be cute if he told these con-artists that they can come and then call militsiya and militsiya could catch them. But it could be too nervous for him…

So I just want to tell everyone & my Uncle, that I am very proud of him and admire him very much!

Best wishes for everyone and please be healthy, to be ill is to expensive in any country ;).

Do you have a con artist story?