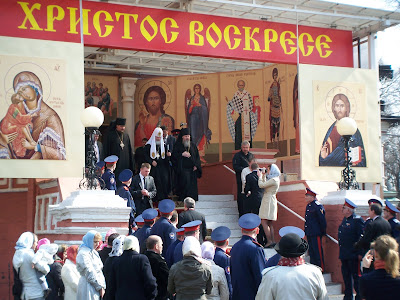 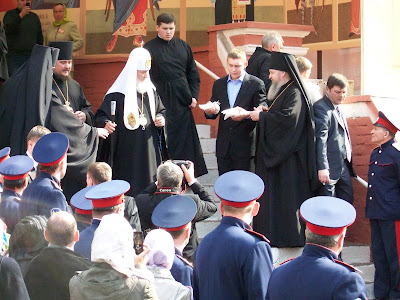 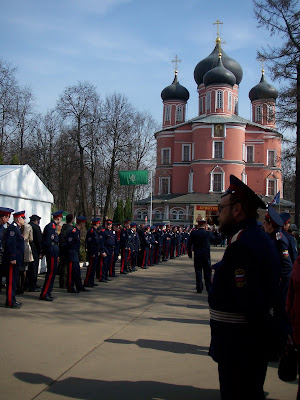 Patriarch Kirill is the person with the white covering on his head. (Covering called – Koukoulion) So who is Patriarch Kirill? – Patriarch Kirill I, or Cyril I (Russian: Кирилл, Патриарх Московский и всея Руси), (secular name Vladimir Mikhailovich Gundyayev (Russian: Владимир Михайлович Гундяев); born November 1946) is a Russian Orthodox bishop who has been Patriarch of Moscow and All Rus and Primate of the Russian Orthodox Church since 1 February 2009.
Prior to becoming Patriarch, Kirill was Archbishop (later Metropolitan) of Smolensk and Kaliningrad beginning on 26 December 1984; and also Chairman of the Orthodox Church’s Department for External Church Relations and a permanent member of the Holy Synod beginning in November 1989. (Link)
Svetlana was walking to work and the church that you see in the pictures is nearby. She noticed that there was a lot of activity and Svet is “curious like a cat” as we say in America…
Svet got to experience a rare moment and she was able to capture the Patriarch Kirill on film. She also has a short video and when she gets home maybe we can do something with that video.
Svet was so excited that she emailed these pictures from work and I for one am proud to post these fantastic pictures of the head of the Russian Orthodox Church by Svetlana!
Windows to Russia!