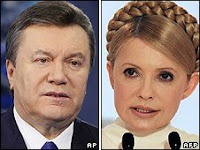 Mrs Tymoshenko said the court was not interested in giving her justice in her case against winner Viktor Yanukovych.

The Kiev court had suspended the result when Mrs Tymosheko appealed on Tuesday, claiming the poll was rigged.

International monitors deemed the vote free and fair, and Mr Yanukovych is due to be inaugurated on 25 February.

Ukrainian Central Electoral Commission’s declaration on Sunday that Mr Yanukovych had won the vote by a margin of 3.48%.

Mrs Tymoshenko complained that the court proceedings were biased against her.

“Given that the court is refusing to establish the truth in essence, I withdrew my lawsuit at today’s morning sitting of the Supreme Administrative Court and asked the court to stop this show, which bears no resemblance to justice,” she said.

I know Russia is happy about this and I am glad that Yulia is going away but I still have reservations about Viktor Yanukovych… (Lessor of two evils?)

May Ukraine start healing from this point on…