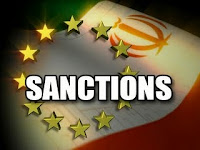 MOSCOW (Reuters) – Russia will not support “crippling” sanctions against Iran, including any that may be slapped on the Islamic Republic’s banking or energy sectors, a senior Russian diplomat said Wednesday. (Link)

Russia nor China will support crippling sanctions and the reason is that America is using these sanctions to cripple and hurt the people in Iran. America hopes to have a continuation of the uprisings that America is fueling in Iran.

“We are not got going to work on sanctions or measures which could lead to the political or economic or financial isolation of this country,” Oleg Rozhkov, deputy director of the security affairs and disarmament department at Russia’s Foreign Ministry, told reporters.

“What relation to non-proliferation is there in forbidding banking activities with Iran? This is a financial blockade. And oil and gas. These sanctions are aimed only at paralyzing the country and paralyzing the regime.”

Russia is correct and sanctions are not the answer if the people in the country suffer. This is not and should never be a personal issue and it looks more and more everyday that America has a personal vindication to settle with Iran…