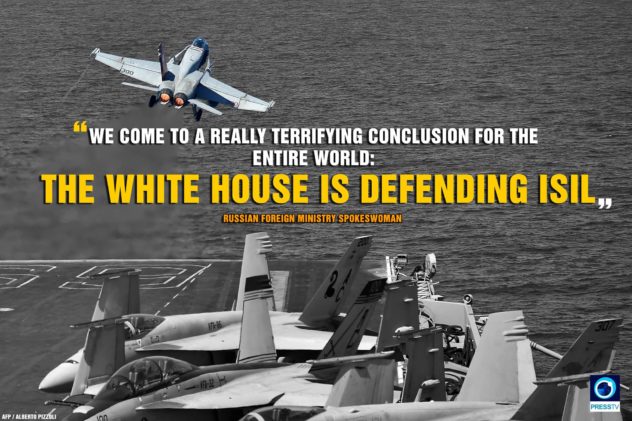 US-coalition forces struck the Syrian airbase at Deir el-Zour: The US Administration Defends ISIS… (No not a question, just the truth.)

TASS News Agency: According to the Syrian government forces’ command, 62 servicemen were killed and 100 more injured in an airstrike by the US-led coalition near the city of Deir ez-Zor:

Russia comes to conclusion that the US defends IS — Foreign Ministry

“If this is the case, then maybe this is exactly why the US side does not agree on publishing the Russian-US agreements on Syria,” Russian Foreign Ministry’s official spokeswoman Maria Zakharova said… More: http://tass.com/world/900514

“If we had suspicions earlier that this is in defense of Jebhat al-Nusra (terrorist organization banned in Russia), then now, after today’s airstrikes at the Syrian army, we come to a scary conclusion — the White House defends IS,” Zakharova said.

“If this is the case, then maybe this is exactly why the US side does not agree on publishing the Russian-US agreements on Syria,” she continued. “We demand explanations from Washington – whether this is a deliberate policy to support IS or a mistake,” she noted.

According to the Syrian government forces’ command, 62 servicemen were killed and 100 more injured in an airstrike near the city of Deir ez-Zor. Russian Defense Ministry’s official spokesman Igor Konashenkov said that on Saturday, “from 5pm to 5:50pm near an aerodrome of the Deir ez-Zor city (Syria), the aircraft of ‘anti-IS coalition’ (two F-16 and two A10) delivered four airstrikes at units of Syrian government forces which were surrounded by Islamic State terrorist groupings,” Konashenkov noted.

The US’ sudden attempt to “help” the Syrian army fighting ISIS in the eastern city of Deir ez-Zor, which resulted in a strike that killed and injured dozens of soldiers, does not look like an honest mistake, Russia’s UN envoy told journalists at the UNSC meeting.

“It is highly suspicious that the United States chose to conduct this particular air strike at this time,” Russia’s ambassador Vitaly Churkin said.

Churkin questioned why the US suddenly chose to “help” the Syrian army defend Deir ez-Zor after all these years, recalling how American forces just observed terrorists’ movements and did “nothing when ISIS advanced on Palmyra.”

It is now clear, we (United States) supports the ISIS and therefore; since we admit that we did this and we is the USA, that makes it all good!

Samantha Power the Queen of the Neocons and a person who has more power than Obama in America; speaks out her ass, as always…

During the emergency UN Security Council meeting on Saturday called by Russia only hours after a US-led airstrike degraded Syrian Army positions leading to the death of some 80 soldiers and “paving the way” for a major Daesh offensive, the United States Ambassador to the United Nations refused to offer remorse but instead laid the blame for the crisis in Syria directly at the feet of the Russian Aerospace Forces who she says is “bombing civilians” and the Assad regime who she claims gave rise to Daesh.

“Why are we having this meeting tonight? It is a diversion from what is happening on the ground. If you don’t like what is happening on the ground then you distract. It is a magician’s trick… we encourage the Russian Federation to have emergency meetings with the Assad regime and deliver them to this deal,” said an aggressive Samantha Power. “What Russia is alleging tonight is that somehow the United States is undermining the fighting against ISIL. The Russian spokesperson even said that the United States might be complicit in this attack… This is not a game,” said the diplomat before going into details on the United States fight against the terror group. “The Syrian regime that bills itself as the fighter against ISIL let the group grow and grow. ISIL took root and prospered right next to the Assad regime,” said Power. “The best way to fight ISIL and al-Nusra Front is to stop bombing civilians and deliver the Assad regime. Assad’s tactics have been a gift to terrorists. There is a better way forward, but Russia really needs to stop the cheap point scoring and grandstanding and focus on what matters. The implementation of something that we have negotiated in good faith with them.” “We regret the loss of life, but since 2011 Assad’s regime have been striking Syrian civilians relentlessly,” exclaimed the American diplomat in an attempt apparently to justify the violation of the ceasefire or to downplay the urgency of the meeting at hand. Some who watched the statements by Samantha Power described it as the US Ambassador to the United Nations blaming Assad for US warplanes bombing his forces.

An Obama administration official offered an official statement of regret for the loss of life caused by a US-led airstrike against Syrian Army positions in violation of a ceasefire — an attack that led the Russian Foreign Ministry to wonder whether the White House is aiding Daesh.

“Sorry we made a mistake!” says the USA… (It was only an airbase for Syria!)