Ceremony for launching the Power of Siberia gas pipeline 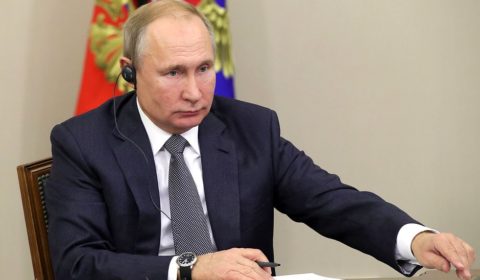 Today is a special day and a truly historic event, not only for the global energy market, but primarily for you and me – for Russia and China.

This year marks the 70th anniversary of the establishment of diplomatic relations, and this year we begin supplying Russian pipeline gas to China. This step takes Russian-Chinese strategic energy cooperation to a qualitatively new level, and brings us closer to the goal we set with President of China Xi Jinping to increase bilateral trade to $200 billion by 2024.

I would like to note that the supply contract our countries signed in 2014 was the largest agreement in the history of the domestic gas industry. The Power of Siberia gas pipeline will deliver more than a trillion cubic metres of natural gas to China over 30 years.

This contract kick-started an unprecedented high-tech project in eastern Russia – a new gas production centre was developed from scratch in severe climatic conditions in Yakutia.

We are developing the Chayandinskoye project, a unique gas field in terms of reserves. The pipeline is under construction and will eventually stretch across some 3,000 kilometres of Russia.

For our country, for Russia, this project is important not just for export but also because it will deliver gas to the Amur Gas Processing Plant, which will become one of the most powerful in the world.

All the necessary facilities are ready to supply gas eastward – both on the Russian side and the Chinese.

I sincerely thank the engineers, the builders, all the employees of Gazprom, China National Petroleum Corporation and contractor companies for their high professionalism and excellent work, which was completed ahead of schedule.

I wish you all further success and all the best.

I am very pleased to attend, with President Putin, the ceremony for launching the eastern section of the China-Russia gas pipeline.

On behalf of the Government and the people of China, I would like to warmly congratulate you on this event and express my heartfelt greetings and gratitude to the oil and gas industry workers of the two countries.

This year marked the 70th anniversary of establishing diplomatic relations between China and Russia. President Putin and I have spoken about progress in China-Russia relations, and our comprehensive partnership and strategic cooperation, which are entering a new era. We agreed that promoting China-Russia relations will remain our countries’ foreign policy priorities. We will steadily work to expand strategic interaction and cooperation in a variety of areas.

The eastern section of the Russian-Chinese gas pipeline is a seminal project of bilateral energy cooperation and serves as an example of the deep integration and mutually beneficial cooperation between our countries.

In May 2014, President Putin and I attended the ceremony for signing the gas purchase and sale agreement in Shanghai. The construction companies from the two countries have worked closely in the past five years.

While working in subzero temperatures and severe climatic conditions and overcoming enormous difficulties, our workers, engineers and oil workers completed the construction project with a high level of quality and showed the entire world the high level of skills and positive results of our cooperation. Launching the gas pipeline is an important interim accomplishment and the beginning of a new phase in our interaction.

I would like to say a few words about management and maintenance requirements for the pipeline.

The first priority is security and maintenance safety.

The second priority is environmental friendliness. We must give special attention to the environment and resource savings in the interests of green, pollution-free, energy efficient and low-carbon development.

The fourth priority is stronger friendship. We must coordinate the interests of our countries even closer in the spirit of mutual understanding and advantage.

China and Russia are at a crucial stage in their national development, and our relations are entering a new phase as well. I hope that our countries will continue working to create even more landmark projects like the Chinese-Russian gas pipeline in the interests of our countries and to the benefit of our peoples.

Mr Putin, thank you. We are grateful to all of you.

I am standing here with some of the Gazprom employees who helped build the Power of Siberia gas pipeline. We are in the control room of the Atamanaskaya Compressor Station on the Russian-Chinese border.

This 128 MW compressor station will provide the necessary pressure for pumping gas into the gas transport system in the People’s Republic of China.

The Power of Siberia is one of Gazprom’s largest projects. Nearly 10,000 people and 4,500 vehicles were used to build the pipeline, which took 130,000 pipe sections of differing diameters weighing over 1.8 million tonnes welded together with over 260,000 joints. We have built over 10 bridges across large rivers and over 100 crossings over small rivers and marshes. Both the people and the equipment have pulled through.

The first phase of the Power of Siberia project involved laying 2,160 kilometres of pipe from the Chayandinskoye field to the Chinese border. The second phase includes 804 kilometres of gas pipeline to the Kovyktinskoye field.

Production drilling is in full swing at Kovyktinskoye field today. The total length of the Power of Siberia gas pipeline will be almost 3,000 kilometres.

Today we will begin supplying gas from Chayandinskoye field, a unique gas field in terms of its reserves. It contains about 1.2 trillion cubic metres of natural gas, and it is the base for the Yakutia gas production centre.

About 10,000 people and 5,000 different machines worked at Chayandinskoye in difficult climatic conditions: in winter, the temperature dropped below 50 degrees Celsius. Despite all the difficulties, construction progressed quickly.

As many as 192 wells have been drilled at Chayandinskoye and a comprehensive gas processing unit has been built. The Yakutia gas production centre is now up and running.

Now I will give the floor to Igor Krutikov, Director-General of Gazprom Dobycha Noyabrsk, who will report on the gas supply to the Power of Siberia gas pipeline.

I am at the comprehensive gas processing unit at the Chayandinskoye field, a key facility in the project’s industrial infrastructure, built by thousands of people from all over Russia.

In just a few years, a gas production and processing plant has been built in the taiga, and pressure booster units have been built. This will allow us to ensure reliable supplies to the Power of Siberia gas pipeline.

We’ve met all the deadlines. Right now, the operational staff is at the site. Gas is being supplied to the main gas pipeline as it should.

Alexei Miller: The Power of Siberia pipeline has been filled with the gas from the Chayandinskoye field and is now under pressure. Gazprom is ready to open the gas supply to the People’s Republic of China.

Construction of the eastern section of the China-Russia gas pipeline is a major strategic project initiated personally by President Xi and President Putin and carried out with their direct support.

On May 21, 2014 in Shanghai, in the presence of President Xi and President Putin, a memorandum of understanding was signed on gas supplies via the eastern route including the respective purchase and sale agreement. Today, at this historic moment, the leaders of the two states are participating in the launch of the gas pipeline and gas supply.

This event inspires and reinvigorates us, the many workers in the oil and gas industry. Construction of the eastern section of the China-Russia gas pipeline was our priority. Under the firm leadership of the Communist Party of China Central Committee, workers of the China National Petroleum Corporation, in keeping with the best traditions of Daqing oil workers, demonstrated unbending will, tenacity and team spirit, finished the construction on schedule and to a high standard and prepared the Heihe-Changli section for operation.

This was the first project to use pipes with an extra-large diameter (1,422 mm), high-level durability (X80) and high pressure (12 MPa). The project used full localisation, from essential equipment to automatic control systems. For the first time, construction of this mainline, which is the world’s largest, has involved full automation for welding and ultrasonic diagnostics.

Today we are launching the northern section of the pipeline, which will allow us to import 5 billion cubic metres of natural gas over the first year. Once the central and southern sections have been put in operation, we will increase the capacity to 38 billion cubic metres a year, thus securing gas distribution to several regions in China, up to Shanghai.

The eastern section of the China-Russia gas pipeline is a major project implemented on behalf of the heads of state. It reflects the tireless quest of the two countries’ companies and citizens to develop and use environmentally safe energy sources and to preserve the environment.

We will continue to focus on safety and environmental standards, and to improve the efficiency of operational control in the interests of the safe and steady operation of the pipeline. In close contact with our Russian partners, we will ensure steady and consistent penetration of the gas market.

We are willing to further deepen cooperation with Russia in the oil and gas sector, which is an important component of Chinese-Russian relations, our comprehensive partnership and strategic interaction which are entering a new era, and promote the socioeconomic development of the two countries and the friendship between our peoples. The China National Petroleum Corporation is ready to receive natural gas from Russia.

The control room at the Atamanskaya Compressor Station controls the linear valve for feeding gas into the gas transport system of the People’s Republic of China.

Mr President, may I have your permission to give the command to open the linear valve?

Igor Krutikov: The linear valve on the border with the People’s Republic of China is now open. Gas supply has begun.

The valve is open, and gas is now entering the gas transport system of the People’s Republic of China.

Wang Jiuling: President Xi Jinping, we are ready to receive Russian natural gas. May I have your permission to receive the gas?

Wang Jiuling: Thank you, President Xi Jinping and President Putin. The ceremony for commissioning the gas pipeline from Russia to China along the eastern route is now complete.

Xi Jinping: Thank you very much.

This is a very historical event…