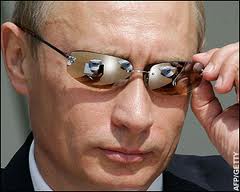 In its latest edition the US magazine Time did its own bit of pre-election ranting about Russia and Putin with its cover story “Russia’s Incredible Shrinking Prime Minister.” The message is in the subhead which reads: “His grip on power is shakier than ever. That makes the world a more dangerous place.”

Intrigued by this caption, I signed on to Time’s website to get the whole story. – But there was none. In vain I searched the whole site over and over again, but all I found about Putin and Russia was a story by Simon Shuster under the heading “See Putin Run: How the Prime Minister Is Relying on Russia’s Heartland.” After all this must be it, I thought. Begrudgingly I read the stuff a couple of times hoping to detect the analysis by which Time motivated its bombastic claims.

But all I found was an insipid diatribe focusing on Putin’s campaign trip to Kurgan, one of the provincial towns of Russia with a population of 300 thousand people. It turns out that either Mr. Shuster wrote the wrong story, or the editor in charge of the front cover did not read Shuster’s story. Whatever, but in the article nothing much about Putin’s “shrinking support,” and why the world would be a “more dangerous place” for that.

Shuster’s article is written in the evergreen style of American exploring journalism. In this genre the gallant and unrelenting journalist is placed in a setting of ordinary people whose sentiments the journalist with his keen and receptive mind catches as his material goes about their everyday life. This style is eminently well suited for propaganda, because here you can ignore all the facts. No analysis will be needed for you are supposedly just reporting what you observe, and being an “independent journalist” representing the “free press” you are a trusted source. And this precisely overcomes the problem that the anti-Putin propaganda otherwise bumps into: it is so difficult to bend the facts to suit the story line as Russia’s achievements under Putin are so truly remarkable.

The story itself is a cynical lampoon full of contempt for the life and aspirations of ordinary Russians, depicting them in terms of trash and a brainless herd. This in accord with the modern self-centered Russian iClass which tried to organize a Facebook revolution against Putin (but for what, we don’t know) together with the self-proclaimed eternally angry and tired Intelligentsia (just imagine, there is this group of people that refer to themselves as the intelligent ones).

In his story, our intrepid explorer visits a “sooty industrial outpost” where “villagers” with “flasks in their pockets” are waiting for Putin to arrive. The scene of the alleged campaign visit, we are told, is “a typically Russian school, complete with busted windows, leaking roofs and a numbing cold inside the classrooms.” But the fact that the Prime Minister visits such a dilapidated school with all its real problems is twisted in Shuster’s Time to mean that this was just a reversed Potemkin village. Not hiding the reality behind a beautiful facade, the journalist insists, is a shrewd campaign trick. How warped does a mind get so as to reach such a conclusion? However, judging from the photo of the school cafeteria that Time adorns the article with, it does not look bad at all (maybe this is another detail they got wrong in the haste?).

A special dose of contempt is directed towards Kurganstalmost, a local steel-beam factory. Mr. Shuster accuses Putin of the crime of keeping the plant afloat by government contracts that pay the wages of its about 3,000 workers. This while back in the USA the steel belt has turned into a rust belt as factories are closing down and whole communities are turning into ghost towns. Without Putin’s concentrated hands-on efforts to keep the industry going all over the vast country, Russian workers could well have met the same fate as their American counterparts reeling under a de facto 16% unemployment versus Russia’s 6%. (According to the official statistics the US unemployment is some 9%, but this is only because they remove from the statistics the hopelessly long-term unemployed who the government labels too lazy to work).

By repeated rereading of the story we detect some traces of data that connect with the gutsy proclamations of the front cover. Remember that the story is supposed to prove the contentions that Putin’s popularity has plummeted and that this now poses a threat to world peace. To the first subject of drastically shrinking support, Shuster rattles off a list of astonishingly contradictory propositions.

First he states: “His ratings in Russia’s biggest cities have fallen to historic lows,” which he wants to prove by the claim that the “middle class” has “been rallying in Moscow by the tens of thousands.” However, next he states that Putin’s campaign message has “worked like a charm in places like Kurgan.”

This is followed by the again quite contradictory claim that “even in Kurgan Putin no longer has many diehard fans.” The latter conclusion Shuster draws from his observation of how Putin “walked into the local school,” especially by observing his “slightly pugilistic stride.” And as if that would not be contradictory enough, he adds that everyone in this town regards Putin as a Czar, which certainly in Russia is a positive reference as far as popular support goes.

Finally he quotes the local sociologist, Elena Gabitova, a pollster who is said to lament that all people back there “still support only Putin.” – So where is the shrinking support? It’s in Moscow, Shuster says. There we find the educated progressive “middle class” making up half of the population, according to the sociological data of Shuster. But Shuster does not tell the reader that even in this citadel of progress 50% of the voters are according to the latest polls going to vote for Putin. So finally what is the argument on which Time bases its incredible affirmation? Oh, Shuster tells that Putin’s approval ratings “in 2006” used to be “well over 70%.” But the approval rating is still over 60% of today.

So where’s the beef?  That’s huge support for anyone, and especially an elected leader who has been 12 consecutive years in power in a country plagued by a load of inherited problems. And ironically, this story was published on the same day, 24 February, when Levada, the pollster close to the opposition, admitted that Putin is on track to win in the first round with an overwhelming majority of two thirds of the vote. – Time has a very special notion of time as well. This article that was published on the 24th is dated 5 of March, and the magazine still insists that it is only then that it will appear. Try to make sense of these guys!

In the hurry to distribute the latest propaganda tagline, the venerable magazine completely forgot that the story did not have anything at all about the second part, that about the world being a more dangerous place following this alleged shrinking. Or perhaps this is supposedly proven by quoting a Paul Saunders from the Center for the National Interest (not from Kurgan but Washington) who informs us that Putin “will be tempted to appeal to Russian nationalists and may find it more difficult to pursue policies that would antagonize them.” Not much for a cover story.

Having thus perused this article it actually reminded me about another with a similar title, The Incredible Shrinking Brain, in the popular science magazine Discover (September, 2010). In this article John Hawks an anthropologist from the University of Wisconsin startles the readers by throwing out that the human brain has actually been shrinking in a recent evolutionary trend. The reporter asks whether it means that we’re getting dumber.

And in a comment to the article a reader contends that “it sure does explain a lot of what we observe every day in the United States.” Well, it doesn’t because human cognitive capacities are the same all over the world. But we may certainly speak about shrinking of the mind in a cultural sense – a numbing of the cognitive facility polluted by the modern propaganda.  This is the result of the erosion of a free and competitive press following a substantial consolidation of Western media assets in hands of a few media oligarchs with strong right-wing ties. For these media oligarchs truth is traded against pecuniary interests, power and the global ideology.  Being a Russia specialist, I read the ensuing propaganda against Russia as an open book, and harbor no doubt that the same occurs in all aspects of life this “free press” purports to report about.

I must conclude that this story in Time indeed needs to be seen as a cover story, that is, a fictitious account that is intended to hide from the readers the real motives of the publisher.

The author, Jon Hellevig, is a lawyer from Finland lawyerand Managing Partner of Hellevig, Klein & Usov (www.hkupartners.com) who has worked and lived in Russia since the beginning of 1990′s. He is the managing partner of the law firm Hellevig, Klein & Usov. Hellevig has written a book on the development of Russian law after the fall of the Soviet Union (Expressions and Interpretations) and on the conditions of democratic competition (All is Art. On Democratic Competition). www.hellevig.net hellevig@hku.ru

The views of the above author are not strictly the views of Windows to Russia. They are an independent view from an outside source and country that brings a better light on the world in general and Windows to Russia is pleased to have Jon Hellevig’s article on its pages today. It is hoped that we will have many more of his writings in the future…