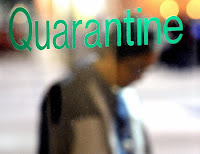 KYIV (Reuters) — Ukraine has closed schools, banned all public events, and imposed restrictions on people’s movements around the country for a three-week period after confirming its first death from H1N1 swine flu.

“All educational institutions without exception…will be switched on to a three-week holiday period,” Prime Minister Yulia Tymoshenko announced. She indicated this period could be extended if it was deemed necessary.

“Apart from this, we will make the decision to cancel all mass meetings…for three weeks,” she said at an emergency government session.

“We will introduce a special system to stop unnecessary travel by people from one region to another,” she added.

Earlier, the Health Ministry confirmed that one of 30 deaths in Western Ukraine since mid-October that had been attributed to flu and pneumonia had been caused by the H1N1 strain, commonly known as swine flu.

“So far, not all the dead were tested [for H1N1],” a Health Ministry spokeswoman said. “However, tests on one dead [person] proved positive.”

“We are considering [imposing] a quarantine not only in the west, but also across the country because the virus is spreading very fast,” Health Minister Vasyl Knyazevych told a news conference, without giving details.

Glad I got in Ukraine and back out when I did a week ago. I may have been stuck for a while…

Think maybe this has to do more with control of people at election time than the flu?

Update: Seems that I hear that 11 have died from confirmed swine flu cases. That is eleven of the 30 or so reported deaths. Not eleven new deaths…