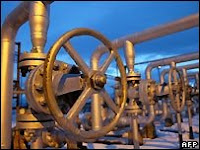 Looks like the pressure from Europe has started to have an effect on Ukraine. The EU gas monitors and Russian counterparts have finally been allowed into Ukraine. This has been a big hold up in turning the gas back on.

Russia has said that EU or Ukraine Monitors can check any and all Russian gas lines that they want. Russia has nothing to hide. In fact – Russia welcomes the European Community to keep a close watch on the gas flow. Russia is here to sell gas not play political games with gas, like Ukraine has been doing.

According to Gazprom it will take three days to get all gas back up to full steam. But it will not start flowing again until the EU monitors are in place.

Russian President Dmitry Medvedev has instructed the Russian energy giant Gazprom on Friday that gas supplies to Ukraine should be resumed only after the necessary documents are signed.

“Of course we are interested in gas transit resumption as soon as possible. But nevertheless I would like you to be guided by my instruction in solving this task: all these actions could be performed only after the documents are signed,” Medvedev said at a meeting with Gazprom CEO Alexei Miller.

“We will never stop the theft by any other means,” the Russian president added. “Unfortunately, [we] have no more trust in the Ukrainian side.” (Link)

Russia is very serious about never trusting Ukraine again over any commercial adventures such as resources. Putin and Medvedev have made it clear on Russian TV that the Ukraine government has lost respect from the Kremlin. The people of Ukraine have suffered enough by the political games that Viktor Yushchenko is playing with the lives of Ukraine people.

Russia has been put between a hard place and a brick! While all that I have seen out of Western press is “Russia is unreliable energy partner”. In fact most articles fail to even mention that Ukraine is the one in control of their own pipelines and also Ukraine not Russia controls what comes out the European side of the pipe lines. Everyone seems to want to express the blame on Russia or at the very least the implication of dirty dealing on Russia.

“A natural gas dispute between Russia and Ukraine flared Tuesday when Ukraine accused the Russian supplier of cutting supplies to Europe, and at least nine countries said their supply from Russia had been cut or reduced. (Link)” This article from CNN just forgot that Ukraine is a transit country and is responsible for the gas distribution across its borders!

“A sharp cut in the supply of Russian gas to Ukraine will affect Europe within hours, Ukraine’s state gas company Naftogaz says. (Link)” A Bulgarian article just expresses the Ukraine side.

“Twelve European countries are now without any gas from Russia after Austria, Slovakia and the Czech Republic announced this morning that their supplies had halted altogether. Slovakia declared a state of energy emergency.

France, Italy and Germany have already reported that their supplies from Russia are markedly down. (Link)” This article from Britain just happens to make sure that we understand that gas comes from Russia and it supplies are affected because of Moscow’s Bitter Row With Ukraine!

I have found hundreds of articles similar to this scenario above.

The headlines should have been reading: Ukraine Steals European Gas Again, Russia Needs Support in Stopping the Theft!