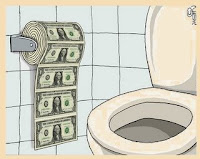 Want a tidbit of information that the Western Press will not tell you?

The US dollar is no longer Russia’s basic reserve currency anymore.

The euro share of Russia’s reserves has been increased by Russia’s Central Bank to a new level of 47.5 percent as of January 1, 2009. Which has intentionally exceeded the investments in dollar assets, which now make up only 41.5 percent, The Vedomosti newspaper wrote.

The dollar has thus lost the status as per planned for the basic reserve currency for the Russian Central Bank, this is as provided in the annual report, to the State Duma.

This falls into place with the selling off of Freddie and Fannie Mae notes.

China says: We are next!