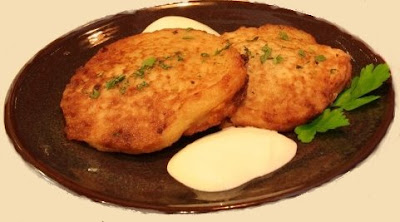 The world was making Draniki (potato pancakes) before Russia had potatoes, but Russians still think that they have the best Draniki. It seems that Belarus had potatoes about 75 years before Russia did and Draniki is the national food of Belarus, so for this article we will give Belarus the claim for this recipe. There are many other names for potato pancakes all over the world – latkes, deruny, reiberdatschi, kartoffelpuffer, rårakor, raggmunk, gamjajeon, rösti, boxty and papas rellenas are to name a few.

As all foods in the world, everyone has a better recipe then the neighbor. 🙂

First:
Peel the potatoes and grate them, add sour milk, eggs, salt (to taste) and mix everything.

Attention – *Now timing is important in this recipe. Once potatoes are cut they oxidize and start to loose flavor. So grate fast and get mixed. The quicker all potatoes are covered in egg and sour milk the better.*

Third:
Scoop a mass of potato mixture and carefully lay in the hot oiled skillet. Keep separated from each other (each pancake no more then 10 cm or 4″ in diameter).

Fourth:
Cook until crisp and browned, then turn on the other side.

Fifth:
Once done remove from skillet and lay on a plate covered with a clean paper towel to absorb excess grease. (or how every you are comfortable to remove excess oils.)

Sixth:
Taste finished product so that you make sure they are good. You may have to taste several times. 🙂

Notes: You can add pork fat, crackling’s, fatback, onion, garlic, black pepper, herbs, ham chunks, mushrooms, cheese or really just about anything. These can be American style and be made out of mashed potatoes. Just use your imagination…

These also can be served with a variety of toppings. Honey, jams, jellies, ketchup, mustard and so on…