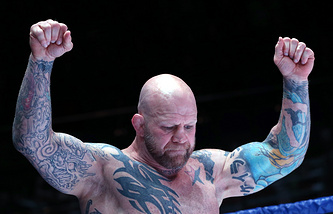 Monson read out the oath.On May 29, Russian President Vladimir Putin issued a decree to grant Russian citizenship to US athlete Jeffrey Monson.Jeffry William Monson, nicknamed The Snowman, hails from Minnesota, US. He has so far held 85 fights as a mixed martial artist, chalking up 60 victories. Likewise, he is a Brazilian jiu-jitsu world champion.Monson, a mixed martial arts fighter, is a native of Minnesota. He has held 85 fights to win 60 of them. He is also a Brazilian jiu-jitsu world champion. Monson is known for his fondness of Russia and its Soviet past. Many times he began his fights to the tune of the Soviet anthem. In 2016, he received the title of honorary citizen of Abkhazia and last year, a passport of the citizen of the self-proclaimed Lugansk People’s Republic.