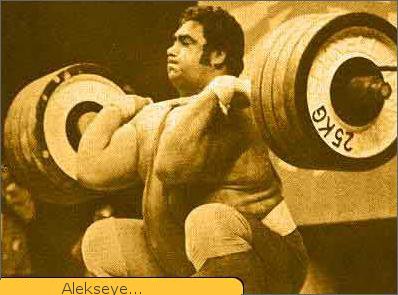 I was saddened today when I heard that Vasily Alexeyev  has died. He was one of my heroes in the early 70’s. I remember the rumors that we passed around about him and his huge belly. We would all say that we heard that his belly could stop a Colt 45 at point blank range because he had so much muscle in his belly. It did not matter that he was from the Soviet Union, he was the baddest man we knew on earth and that broke the barriers of the cold war…

So it is with sadness that I post this:

Soviet weightlifting champion Vasily Alexeyev, who set 80 world records in his day, died in a German clinic on Friday at the age of 69.

Alexeyev, who won two Olympic and eight world super heavyweight titles in the 1970s, had long been suffering heart problems. He was sent to the clinic in Germany earlier this month after his health deteriorated.

Born in a small town of Shakhty in southern Russia in 1942, Alexeyev set his first world record in January 1970. He became world champion later that year and held the title for the next seven years.

Alexeyev won gold medals at the 1972 Summer Olympics in Munich and the 1976 Games in Montreal. He was also the first man to total over 600 kg (1,200 pounds) in the triple event.

Russian Sports Minister Vitaly Mutko said Alexeyev was not only a prominent athlete, but also a “great public activist and caring man.” He said a monument could be installed or a special weightlifting tournament organized to honor Alexeyev’s memory.