War that’s what we do! We are a aggressive and dangerous country. Lets just for sanity sake start around the early 1980’s. Most people have some knowledge of that time frame. So what was and is the US up to in the world of wars? 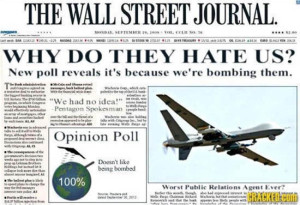 If you want a really long list, we can go farther back, but this list definitely gives the picture of how and why we are such a loved and desired country in the world…

I find that Americans are either plain stupid or they just do not care and we all walk over the gasping, dying, writhing mess that is our life. So that we do not have to deal with little things like blowing the hell out of other countries for no reason, other than the simple pleasure of making a handful of people very rich and very powerful. I said it makes them rich, not you, because it sure in the hell does not do anyone else in America any good and in the end run it will be a detriment that will be our demise…

Maybe if we try real hard and work at it. This time we will succeed in starting WW3. Then I can promise all that ocean buffer, will not keep you safe. WW3 will be taken to the US doorstep and no one will knock as they kick the door in. While we are a very powerful country, we are not invincible and the world is getting smaller by the day. Nukes do not care how many guns you own, nor how much ammo you have…

Besides Afghanistan whipped our ass…

The copy scores 61.6 in the Flesch Reading Ease test, which is considered OK to read…