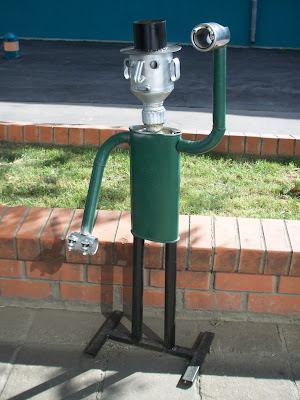 Svet and I had a very interesting weekend. Grab your self a cup of coffee and lets talk about what the weekend was like.

As you know we have purchased a Volga to replace the one that was stolen several months ago. So we are still trying to get everything done and make our new Volga legal for the Russian roads. Saturday was supposed to be the big day to get the tags, but things never happen like they should.

We had to get a new muffler put on the Volga and for this American it should be a easy thing to do. You just go to a shop that works on exhaust, they install a new muffler and then you are on your way with about an hour delay. Nope it will not happen that way when you are in Russia!

We finally found a shop in our new home area and they looked at it and said, “Yup you need a muffler – Just go get one and we will put it on….?”

I said, “We have to go get a muffler so you can put it on?” Notice I was questioning the validity of such a statement… (In Russia they do not get parts – You always get parts for them to put on.)

So we spent 4 hours finding a parts store that cared enough to get off their rears or even look up and help us get a muffler. Took the muffler back to who said he would put it on and found that he was too busy drinking tea for an hour with his buddies to install a muffler. (Urrrgh)

Svet and I went back to the car and found the battery dead as a door nail! So we walked to the parts store and got a new battery. I put the new battery in and filed some information away in my head that not all was perfect with the charging system but it was Ok for now.

Svet found that the guy was still just too busy to make any money by putting on a muffler and we left upset. As we drove away with the Volga sounding like a farm tractor, Svet saw another little sign that pointed down a side road and mentioned that there was a service center that way.

We turned and wallah wallah bing bang – we found a little shade tree mechanic spot that had several young men working. They were very happy to help and charged half of what the other place would have charged. (Yippy)

All in all it took 12 hours to get a muffler put on and Svet and I were happy that we were able to even get it done at all. Now remember we never even got to the tag department…

The next day (Sunday) Svet and I met the Americans (Dennis and Darrell) that I have talked about who for three weeks have been running around Russia. They have had the time of their life and we wanted to spend a last day with them before they went back home on Monday.

I watched the charging system on the Volga die slowly on Sunday but I knew that she would be Ok for that day. We took Dennis and Darrell to the Moscow river and took an excursion for three hours on the river. This is a fantastic way to spend the day. There are hundreds of large boats that will hold hundreds of people at a time and it travels slowly from one side of Moscow to the other and it gives you a view of Moscow that you normally do not see.

After that we said goodbye to them and wished them well. They had the time of their life in Russia and will be back in a few years. Dennis comes every two years and this year he was able to bring his oldest son. Dennis has plans to retire and live in Russia for the rest of his life. I hope he can do that! It is worth it…

Svet and I then pushed our luck and took Sammy the Volga to an international short movie festival. The one thing about Moscow is that there is always something to do…

The movies were fantastic and it was 10:00pm before we started home. That is when the charging system gave out. The head lights were to much and it looked like the regulator or alternator just said goodbye. (Another story is what happened on the way home from the movies!) We got it home and parked as she just started to miss fire from low battery. (Thank goodness!)

Of course this meant that I would wake up on Monday with another whole wonderful thing to do. At least this time I could replace the alternator and regulator. I spent Monday trying to find the parts and installing a new alternator. Svet’s son (Misha) was the one who finally found the parts and drove them over to us. That was a huge help and I was much appreciating his help.

Sammy the Volga is one happy Volga with her new parts and runs like a top now….

How was your weekend?