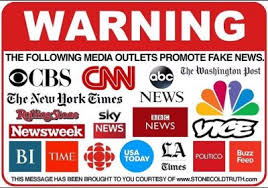 The corporate media’s editorial standards for reporting on Official Enemies of the US government, especially North Korea, are as low as ever. Blatantly false stories are regularly circulated by leading news outlets without any kind of accountability.

In the latest example of fake news disseminated without any hint of skepticism by America’s top journalists, virtually every major media outlet reported that a senior North Korean official named Kim Yong-chol was supposedly forced into a “labor camp,” as part of a larger deadly “purge.”

Source: Top US journalists spread fake news claiming North Korean official was ‘purged’ – then he shows up on TV | The Grayzone

I think it is about time that you/we/us/them/those and everyone else as in all of us humans, stopped listening to Western Media and start thinking for yourself…