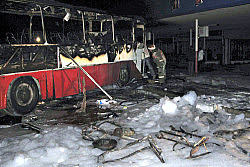 I was drinking my morning cup of coffee & thinking about the bomb that blew up a bus this Sunday! Seems like this is the second bus to be blown up in Russia in the last month or month and a half!(article Moscow Times)

I can not understand why anyone in this world would injure innocent people. Seems strange to me to hate the world so much that you have to blow up buses to enjoy life!

I remember the Oklahoma City Bomb! (Timothy McVeigh) . That was a good example of someone killing innocent people for no reason.

What do you think? Are times changing for the worst?

(article from Moscow times)
“A bus blast that killed two women and injured 14 others in southern Russia over the weekend was the result of an explosive device, investigators said Monday.

The bomb went off at about 4:30 p.m. Sunday while the bus was making a planned stop in Nevinnomyssk, a town in the Stavropol region, and the number of casualties would likely have been much higher if the bus had been on the road and full of passengers, Kommersant reported Monday.

Many of the passengers were outside taking a break when the explosion tore through the bus, which was heading from Stavropol to Pyatigorsk.

Besides the two dead women, identified as Susanna Gazoryan and Yelena Tarasova, 14 others were injured in the blast, Interfax reported, citing a source in the regional Emergency Situations Ministry. Five victims remained hospitalized as of Monday afternoon.

Photographs showed the gutted, charred shell of a bus with its windows shattered and the back of its roof lifted upward by the force of the explosion.

The bomb had the equivalent of 500 grams to 1 kilogram of TNT, an unidentified law enforcement source said, Interfax reported.”