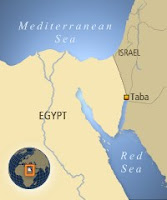 My wife and I have just purchased airline tickets to Israel! We will leave on the 5th of October, 2008 and return by the 21st of October, 2008. We also plan to travel Egypt while we are in the area but not as extensive as Israel.We can travel to Egypt by bus after seeing the sights in Israel.

This is a trip of a lifetime for us both and we are very excited to be going. I have written about some of the worries (Link) but we decided that why worry just go. 🙂

We have a new lap top (Dell Inspiron) and this time we have secured reliable internet to work from any and all sources that we can find. (Israel seems to have WiFi everywhere, not sure about Egypt.)

This is a list we have found of some things to do and go see:

Now as far as Egypt is concerned we have a desire to go to the oldest Monastery on Earth in the Sinai Peninsula. Then we want to see a pyramid…. (Egypt is ad lib as we go!)

As we get closer we will let everyone know more information. This time we are really working on being able to post as we travel!