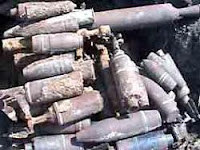 “The work on the site of the incident is in progress. The area has been fenced off by police. Experts say that up to 1,500 shells are underground at this particular place.”

This is direct from the news source and they say that they find about 200 to 300 shells year but it has been a long time since they have found a cache this large. Everyone has been evacuated and it seems that the shells were found while a work crew was digging and working on water lines…
Makes you wonder what all is buried in a city as old as Moscow?
Windows to Russia!