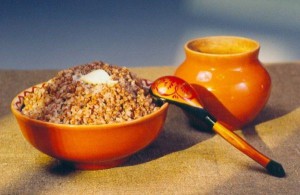 Kasha refers to whole family of porridge’s and is considered a native Russian dish. Kasha is made from all the possible types of grains mixed with beef, pork, chicken, fish, mushrooms and onions for just some of the combination’s.

Kasha is also a cereal commonly eaten in Eastern Europe. In English, Kasha generally refers to buckwheat groats, but in Slavic countries, Kasha refers to porridge in general and can be made from any type of cereal, especially buckwheat, wheat, barley, oats, millet, and rye. At least a thousand years old, Kasha is one of the oldest known dishes in the Slavic cuisines of the Eastern European cuisine…

Just think of Oatmeal for every meal…

So lets try three Kasha recipes out of the hundreds, no thousands millions 🙂 available. Remember just use your imagination and create with a Kasha dish…

Rinse the raw rice under cold running water. Drain well and then fry it in butter, in a hot non stick skillet until light brown in color. Dump the browned rice into a pot of boiling water. Then turn the heat down and cover and salt and cook on low heat for 45 minutes. Should be served hot and sprinkled with grated cheese all over the top…

Soak peas in clear water for 2 hours. Then drain and put peas in sauce pan with fresh water to boil until very well done and soft. Then add well washed millet and continue to boil until millet is ready. Then drain the excess water off if any. Put cooked peas and millet in a mixing bowl then mash peas and millet until a pureed mass. (I have even used a hand mixer on low speed) Take the chopped onion and fry it in the oil in a skillet. Add onion and salt and pepper to taste to the Kulesh. Serve hot… (I have even put this mixture into an oven pan and baked it for 20 minutes with cheese on top and it is really delicious)

In the not so old days Kasha was always made in earthenware crockery. The best is still made this way…

Fill 3/4 of a pot with buckwheat groats, add salt, butter. Pour over boiling water up to the about the top of the pot. Stir very carefully so as not to spill down the sides. Then put into a well heated low temperature oven for 2-3 hours. About one hour before finishing, cover the pot with a large pan and turn the pot upside down. Leave the pot in place with the top flat against the pans inside bottom. A half an hour before serving, put cool wet fabric around the pot in order that the Kasha falls away from the pot insides. Serve with cold baked milk or melted butter…