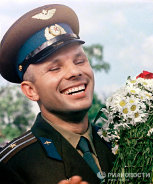 On April 12, 2011, Russia and the world will mark the 50th anniversary of the historic flight of Yury Gagarin, the first man in space.

Yury Gagarin was born March 9, 1934 in Klushino, a village in the Gzhatsk (now Gagarin) District of Russia’s Smolensk Region.

His parents, Alexei and Anna Gagarin, came from local peasant families and were themselves collective farmers. In 1941, Gagarin enrolled in Klushino Secondary school, but his studies were disrupted by the German invasion of the Soviet Union that same year. After the war, Gagarin and his family moved to Gzhatsk where he continued his studies.

After graduating from sixth grade, Gagarin enrolled at a vocational school in Lyubertsy near Moscow, and supplemented his studies with evening classes at a local school for young workers.

In 1951, Gagarin completed seventh grade at the evening school, and also graduated from the vocational school with an honors degree in mold-making  and foundry work. That same year, Gagarin enrolled at the Saratov Industrial Technical School, graduating in 1955. While still a student, Gagarin joined a local aviation club. After this, aviation became his life’s work.

In 1955, Gagarin was drafted into the Soviet Army. He was sent to study at the First Chkalov Air Force Pilots School named after Voroshilov in Orenburg. Gagarin graduated at the top of his class in 1957, and chose to serve with a Northern Fleet aviation unit in the Soviet Arctic.

On December 9, 1959, Gagarin submitted an application to join a squad of prospective cosmonauts. Gagarin underwent a rigorous medical examination at the Moscow-based Central Research Military Aviation Hospital. In early 1960, a special medical board pronounced Senior Lieutenant Gagarin fit for space missions. On March 3, 1960, Gagarin was included in the squad of prospective cosmonauts by an order of the commander of the Air Force, Chief Air Marshal Konstantin Vershinin, and started training on March 11 that same year.

On April 12, 1961, Gagarin performed the first manned space flight in history aboard the Vostok-1 spacecraft, orbiting Earth in 108 minutes and landing safely near Smelovka village in the Saratov Region’s Ternovsky District.

On April 14, 1961, Gagarin was declared a Hero of the Soviet Union, receiving the Order of Lenin and the Gold Star Medal. Senior Lieutenant Gagarin was also promoted to major by order of the Soviet Defense Minister that same day.

In late April 1961, Gagarin left on his first trip abroad. Gagarin visited numerous countries around the world for two years. His foreign visits are sometimes called the “Peace Mission.” Kings and presidents, politicians and scientists, actors and musicians considered it an honor to meet the famous cosmonaut.

On May 23, 1961, Gagarin was appointed commander of the Soviet cosmonaut squad. In the fall of 1961, Gagarin enrolled at the Zhukovsky Air Force Engineering Academy in order to complete his higher education.

From December 20, 1963 through March 1968, Gagarin was deputy director of the Cosmonaut Training Center. He was directly involved in training space crews and supervising a number of Vostok, Voskhod and Soyuz space missions.

Gagarin resumed flight training in 1963 and started training for the Soyuz-1 space mission in 1966. He was selected as Vladimir Komarov’s back-up man. Komarov was tragically killed during the reentry of the Soyuz-1 spacecraft in April 1967.

Gagarin was active in social and political work as well. He was elected to the Sixth and Seventh Congresses of the U.S.S.R. Supreme Soviet (parliament), the 14th and 15th Congresses of the Central Committee of the Young Communist League (Komsomol), president of the Soviet-Cuban Friendship Society and honorary member of the Finland-Soviet Union Society.

In 1966, Gagarin became an honorary member of the International Academy of Astronautics.

Gagarin received numerous prestigious Soviet and international state awards, including the Order of Lenin, a number of Soviet medals, the orders of many foreign countries, the Golden Tsiolkovsky Medal from the Soviet Academy of Sciences, the Fédération Aéronautique Internationale (FAI) De La Vaulx Medal, gold medals and honorary diplomas from the International Association of Man in Space and the Italian Space and Astronautics Association, the Distinction Gold Medal and Honors Diploma of the Royal Aero Club of Sweden, the FAI Gold Medal and Diploma, the Gold Medal of the British Interplanetary Society, the Galaber Prize for Astronautics and others.

On March 27, 1968, Gagarin was killed in an air crash near Novosyolovo village in the Vladimir Region during a training flight. His ashes were interred in the Moscow Kremlin Wall.

The Soviet Government renamed the town of Gzhatsk in the Smolensk Region to Gagarin in honor of the fallen cosmonaut. The Air Force Academy in Monino outside Moscow was also named after Gagarin. The Gagarin Scholarship for cadets at Air Force schools was also established. Moreover, the FAI instituted the Gagarin Gold Medal. The Russian State Research and Cosmonaut Training Center, various academic establishments, streets and squares in many foreign cities are named after Gagarin.

Monuments to Gagarin have been built in Moscow, Gagarin, Star City outside Moscow and Sofia. Another monument has been unveiled near Smelovka village where Gagarin landed after his historic space flight. The Yury Gagarin Memorial House-Museum has been opened in Gagarin.

A crater on the moon, and an asteroid have also been named after Gagarin.

This information is based on open sources.