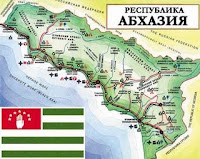 How about some information that has Georgia very upset and pouting:

ITAR-TASS: MOSCOW, February 17 – Russian President Dmitry Medvedev has expressed confidence that Abkhazia’s cooperation with Russia on the international scene will contribute to recognition of the republic’s independence in the world.

“We will develop cooperation on the international scene, including that within the framework of the Geneva discussions. This forum is a good platform for direct contacts of Abkhazian friends with western partners and international structures,” Medvedev said.

“Finally, all this will contribute to recognition of the republic’s independence,” he said after the talks with his Abkhazian counterpart Sergei Bagapsh.

Russia and Abkhazia today signed a deal today allowing Moscow to establish a military base on its soil, causing Georgia to literally have a heart attack.

Russian President Dmitry Medvedev and Abkhaz President Sergei Bagapsh witnessed the signing of the deal by their defense ministers, following talks at the Kremlin in Moscow today.

Russia’s Interfax news agency says the agreement will allow Russia to use and update the infrastructure of an existing military base, as well as to form a joint group of forces. Interfax said the land base has its headquarters located in the port town of Gudauta, just north of the capital, Sukhumi, and already has 1,700 servicemen.

The document is valid for the next 49 years, after which it will be automatically prolonged once every five years.

Another tidbit today is that Russia and an Abkhazia has also signed a formality that the Russian railway will take over all rail services in Abkhazia. Also it has hinted at rebuilding the airport infrastructure and putting Abkhazian airports under Russian care…

Soon the whole Abkhazian infrastructure will be under Russian support…