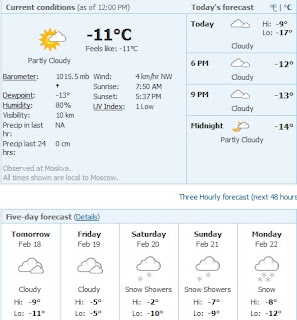 Today I had a good chuckle at a New York Times article that was sent to me by e-mail. This article is called: Washington Shivers, Moscow Laughs!

The New York Times article is from a perspective of American journalists commenting on Russian journalists reactions in DC about the snow:

In their reports sent home, Russian journalists in Washington seemed to have a hard time suppressing their grins. Mikhail Solodovnikov of Russian state television did his segment wandering outside the Capitol without a hat, as if to demonstrate how positively temperate the place was. (It is practically against the law in Moscow to venture outside hatless in February.)

“Political life is dead,” Mr. Solodovnikov told his viewers. “News about the weather totally displaces news about anything else happening in the world. As if this is a tornado or a hurricane, and not just simply snow.”

That last statement is the clincher, “not just simply snow.” That is where the mind set of a Russian diverges from an American about snow. When you sometimes live with snow 6 months a year or even longer. Snow becomes part of life, not a “here today gone tomorrow” sort of thing!

I would like to point out that Moscow really does not see anything laughable in Washington’s reaction to snow but as a past article of mine says, “Moscow (Russia) does wonder about America and snow!” Russians have a real curiosity about American reactions to all the snow and they ask, “Why do you shut down everything!”

(? – good question! The article from New York Times implies litigation is an important reason for differences between the two counties?)

In Moscow I have watched this winter and not once do I remember the temperature going above freezing. So in accordance with laws of nature: The snow does not melt and every snowflake that fell this winter, is crushed into a slab of ice 8 to 12 inches thick by the millions of feet trampling on it.

Svet has been running around happy and telling me that Spring is here and you can feel it in the air. It has not snowed in two days and that was strange to me because it seems to snow everyday here. But as the weather shows we have plenty more snow coming. 🙁

So I put two pictures above, that to tell what the Moscow weather is like!

This picture that is next: 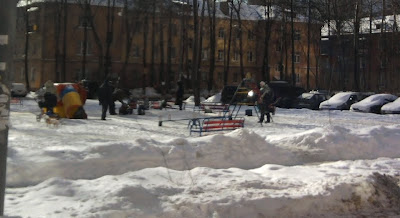 Was earlier today and as you can see even though the sun is shinning, it is more like a huge spot light at night than a warm inviting sun. Nevertheless the moms bring their kids out to play and everyone goes about business and nothing ever shuts down as far as I can see.

It was -16 degrees Celsius (around +2 or +3 degrees F. ) at the time this picture was taken! Now people in Russia do not get to excited about near freezing temperatures. That just means more snow, the coming mud from hell and yes, as my Sweetie says: “Spring is in the Air!”

PS: This is why I love Russia!