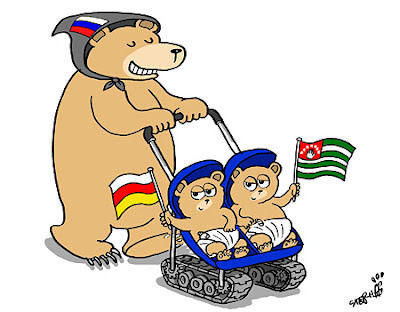 The official part of the President of Abkhazia’s visit to Russia is over. It might sound like a commonplace thing to say, but this visit really does mark a new milestone in Russian-Abkhazian relations. The documents we have just signed are evidence. There are a number of them and they cover practically all areas of our cooperation – the economy, in particular the transport sector, migration, defence. I hope that these agreements will serve as a base for even more intensive development of our economic ties.

We were not idle last year, but signed a substantial package of 25 bilateral agreements that laid the legal foundations for cooperation between our countries. Our political dialogue is underway very intensively. Last year, Mr Bagapsh and myself had a whole series of meetings in Moscow, Sochi, and at various international events. The recent presidential inauguration ceremony in Abkhazia was attended by a number of our colleagues. We thus have a full-fledged and substantive political dimension in our relations.

We are developing our interregional ties. Moscow has been active in this respect, as have some other Russian entities, especially those neighbouring Abkhazia, Krasnodar Territory, for example. Other regions are also showing interest in developing relations.

I note these facts because they are tangible evidence that the decision to establish diplomatic relations with Abkhazia following recognition of this new country’s sovereignty is not just a tribute to diplomatic tradition and set of diplomatic attributes, but has substance in the form of full-fledged cooperation, and this is best guarantee of Abkhazia’s development as an independent country.

Today, when we were discussing what steps we need to take, I made a point of saying to our Abkhazian friends that we should make a priority of state cooperation in order to help get Abkhazia’s economy on its feet, supply the means, products and technology essential for economic development, help to establish basic economic and social programmes, boost cooperation in the banking sector, help Abkhazia’s banking sector to develop, and form the base that can then be used to secure an inflow of private investment.

If we build up our cooperation along these lines I am sure that Abkhazia will develop the economic independence it needs to bolster its political independence.

We have a whole number of promising opportunities before us. We have just signed agreements on some of them. One area is Abkhazia’s transport infrastructure, without which the economy cannot develop and build up its most promising sectors such as tourism and agriculture, and also perhaps new projects too, the energy projects our colleagues are working on now, for example.

We are working hard to give our bilateral cooperation a concrete and targeted character. One of the agreements we signed just before is on cooperation in disaster prevention and relief. Of course, we all hope disasters will not happen, but life is such that there is no escaping them sometimes.

Today, incidentally, right at this moment, ten fire engines and rescue vehicles are being delivered to Abkhazia. This is just one specific but important part of our cooperation.

Of course, we spoke today about political issues, international issues, regional security issues. Russia and Abkhazia have an agreement on military cooperation. Today, we signed an agreement on a Russian military base in Abkhazia. This agreement fully reflects our vision for developing cooperation with Abkhazia, and complies with our international obligations. Most important, this agreement lays the base for Abkhazia’s peaceful development as an independent country.

We are developing our cooperation on the international stage too. Our foreign ministries are in ongoing contact as part of the Geneva talks. These talks are not an easy process but provide the only good direct forum today for contacts between our Abkhazian friends and Western partners and international organisations. Ultimately, all of this will help to improve the social and economic situation in the republic, and help to bring about Abkhazia’s universal recognition as an independent state in the eyes of international law.

Concluding these opening remarks, I want to say that this year has particular significance, and it is symbolic that the President of Abkhazia’s visit falls precisely at this time, because almost exactly 200 years ago, Alexander I signed the decree bringing the Abkhazian principality under Russia’s protection, thus resolving a number of serious problems the Abkhazian people faced at that moment.

We are marking this date with cultural events in which the public is taking part. This is also a very important part of our cooperation.

I thank Mr Bagapsh for the constructive dialogue and for developing friendly relations between our countries, and I once again congratulate him on his re-election to office as President of Abkhazia.

PRESIDENT OF THE REPUBLIC OF ABKHAZIA SERGEI BAGAPSH: Thank you very much, Mr President. Friends, colleagues,

On behalf of the Abkhazian people I personally want to say an enormous thank you for the fact that we are here, in the Kremlin, the heart of Russia, among our friends, as a recognised country. We are fully aware of everything that is taking place. We are very much aware of Russia’s and Mr Medvedev’s attitude towards us and our problems. We realise that the decision taken in 2008 was a bold and wise step, and that not everything is so straightforward in the international community. But we know that Russia is a strong and powerful country that speaks out as such.

We began working on the agreements signed today a long time ago, before recognition of our independence. Mr President, you know that your ministries and agencies have helped Abkhazia often and in many ways. Now we are giving these relations a new legal foundation. The agreements we signed today place many responsibilities on Abkhazia. We only recently began developing as an independent country and we still have much to learn, much to get used to, because sovereign countries have far more obligations towards the international community and international agreements than they do privileges. We are ready for this. Russia’s recognition of Abkhazia in 2008 places great responsibility on our country and we want to do everything possible, whether in our domestic situation or foreign policy activity, to live up to the hopes placed on us.

I want to thank you from all my heart for the good friendship we have. Mr President, in Abkhazia you have a good ally. The people of Abkhazia are very grateful to you for everything, and we will always stand by you no matter what lies ahead. Let us hope that what lies ahead is peace, happiness, well being and prosperity for our peoples.

Thank you very much.

QUESTION: You have just signed intergovernmental agreements. Do you plan to sign more agreements in other areas soon? This question is for Mr Bagapsh.

SERGEI BAGAPSH: Yes, a considerable number of agreements will still be needed to ensure our country’s normal work and develop our statehood and inter-state relations. We have signed nine agreements and we have 22 more agreements currently in the pipeline. We will sign some more agreements in all different areas because we cannot just limit ourselves to a few ministries and agencies, after all, but need to develop the whole range of relations between our countries. Agreements serve as the basis on which we build these relations, and so yes, this process will continue.

QUESTION: We see that relations are indeed growing fast. This is a fact, but there is also another factor of no small importance in the Trans-Caucasus, namely, the Georgian leadership’s position.

Mr Medvedev, do you intend to end the freeze in relations with Georgia?

Mr Bagapsh, I address the same question to you, only with an additional question: to what extent do the tragic events of the last two decades hinder or affect you in the necessary task of developing relations with your neighbour, Georgia?

DMITRY MEDVEDEV: I have said on many occasions that Russian-Georgian relations, just like Russian-Abkhazian relations, go back centuries, and we have always had the warmest feelings for the Georgian people and, I am sure, will continue to do so. Ultimately, even the serious conflict that took place in 2008 cannot ruin these relations, I am sure.

The current regime in Georgia, the regime led by Saakashvili, bears direct responsibility for what happened. Sadly, those actions led to bloodshed, to loss of life. This is a crime that should be given a suitable legal assessment. As far as the political assessment of these events go, the situation is perfectly clear for a huge number of honest and decent people today. Despite the Georgian leadership’s various attempts to paint events differently, everyone is aware of who started them and with what aims.

I am therefore confident that sooner or later we will return to full and normal relations with Georgia. It cannot be otherwise. But I personally do not wish to have any dealings with the current President of Georgia. He is persona non grata as far as the Russian Federation is concerned. The Georgian people must decide for themselves through the established constitutional procedures who they want to manage their country, and who they think can lead Georgia to prosperity and to normal and friendly relations with its neighbours – the Russian Federation and the Republic of Abkhazia.

SERGEI BAGAPSH: I am convinced that there are no bad nations or peoples, but only bad politicians that lead their countries into the kind of situation we see today in Georgia. We have never said that we have anything against the Georgian people. But it is up to the people to decide who they want to lead them.

As far as relations with Georgia go… I want to support Mr Medvedev on this point. I am often asked this question. We will not have any dealings with Georgia’s current leadership, which is up to its elbows in blood. Rather than negotiating with Saakashvili, we need to pass sentence on him for the acts he has committed against the Abkhazian and Ossetian peoples and against his own people. You cannot live in this complex and fast-changing world if you quarrel with all of your neighbours. This makes survival very difficult. But it is up to the Georgian people to decide how Georgia should live.

Before we part ways, I want to carry out one task it gives me great pleasure to perform as President of the Russian Federation. Present here today is Mr Iskander, who recently was awarded a Russian state decoration, the Order for Services to the Fatherland, IV degree. It is especially pleasing that this ceremony should take place during the President of Abkhazia’s official visit to Russia.

As Fazil Iskander himself said, he is a Russian writer who sings Abkhazia in his works. There is no question that your works combine the finest traditions of Russian literature and the centuries-old wisdom of the Abkhazian people.

Fazil Iskander’s renown goes beyond Russia and Abkhazia. He has earned international recognition and even had a planet named after him. I therefore think it an entirely fitting conclusion to today’s official visit [by the President of Abkhazia] to present this decoration to a man who symbolises the centuries-old friendship between our peoples and is a link between our countries.

I think we should all express our sincere congratulations to Mr Iskander and wish him good health and all the very best.

Let us offer our congratulations. (Presents the decoration.)