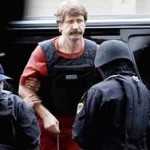 NEW YORK, November 18 (Itar-Tass) – “Professional psychological pressure” was exerted on Viktor Bout during the flight from Thailand to the United States, Russian Consul General in New York Andrei Yushmanov said in an interview with Itar-Tass on Wednesday evening after a meeting with the Russian businessman extradited to the United States.

“Obviously, there was also a professional psychologist among the agents (of the Drug Enforcement Administration) escorting him on the airplane,” the consul general said. “He was given a hint that not only he alone is under threat, but also his family – his wife and 16-year-old child.” “The interviewer at the same time was insistently leading him to a conclusion that the threat is coming from Russia, from Bout’s motherland,” Yushmanov conveyed the defendant’s words. “In particular, he was offered to tell more about his activities and all his contacts – in this case the agent paid special attention to the contacts.” “For cooperation with the US justice he had been promised not only benefits but also that all will be well with him and his family,” the Russian businessman said at a meeting with the consul.

However, stressed Yushmanov, Viktor Bout, in his own words, “dismissed all the hints, because he certainly felt no guilt.”

At the same time the Russian citizen noted good conditions, which were created for him during the flight from Thailand to the United States, adding that he was “even given the same food as the escort.”

At the same time, the consul general stressed, “absolutely all was confiscated – personal belongings, clothes, watches, absolutely all the money and documents” from the Russian in the prison in Thailand. Therefore, he is currently experiencing an elementary lack of personal hygiene – not even soap to take a shower, and the money to buy it all. “He just feels cold,” said Yushmanov. “All this, in view of fatigue after a long flight, a complex agenda and climate change, of course, affect his health.” At the same time, the official said, “Bout keeps a stiff upper lip and shows good spirits.”

The consul general also said that Russian authorities would give assistance to Viktor Bout providing him with all the necessary things for the time of the investigation, including the hiring of paid lawyers. “All this will happen soon, because there is little time left before January 10 (the court’s next meeting),” he said.

“Viktor also asked to convey his regards to his family and arrange for him a contact with his wife,” the consul general noted. He also said that the Consulate is going to help the Russian citizen to find good paid lawyers, although at present “he has no claims to the free lawyer provided by the court.”

According to Yushmanov, representatives of the prison will meet with Bout soon in order to tell him about all his rights, duties, regulations and rules that exist in this facility.

The Consulate General for its part intends to turn to the prison administration in order to lay out all the claims and issues the Russian citizen has at this point regarding his detention in custody.

Bout’s extradition and delivery to the United States took place amid high secrecy and security measures and came as a complete surprise not only to his relatives, but even to his local lawyer and Russian diplomats. Russia insists its diplomats should be granted access to Bout, and it calls for respecting his rights as a citizen of the Russian Federation. The Russian Foreign Ministry has accused the Americans of causing “unprecedented political pressures” on the government and judicial authorities of Thailand and promised to continue to protect the rights of Bout as a Russian citizen. “The whole affair is a sample of blatant injustice,” Russian Foreign Minister Sergei Lavrov said earlier.

Head of the State Duma’ committee on international affairs Konstantin Kosachev, said in an interview published by the Nezavisimaya Gazeta daily that the Russian authorities were acting adequately. They have not interfered in the proceedings on the merits, but, feeling certain doubts about whether investigation and trial can be objective and fair enough in the US, they press for the unconditional compliance with Bout’s rights. Kosachev said that such behaviour by the US side was utterly unacceptable. “A very painful blow has been dealt on our mutual trust and our partnership. This will affect the climate of cooperation in the future. Following the path of some sort of sanctions or reprisals, or showing injured pride would be wrong. But we should draw conclusions regarding the sincerity of our partners.” “The fact that the Americans have used arm-twisting against the authorities of Thailand and brought Bout to their territory raises serious questions about the objectivity and fairness of the trial he may stand there,” he added.