Again you can’t make this stuff up… 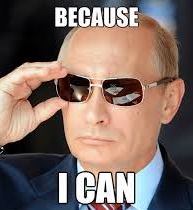 I control your life America!

Last week’s briefing, led by election security official Shelby Pierson and first reported by The New York Times, addressed the overall picture of Russia’s efforts, including hacking, weaponizing social media and attacks on election infrastructure, one of the sources said.

The briefers said Russia does favor Trump, but that helping Trump wasn’t the only thing they were trying to do as it was also designed to raise questions about the integrity of the elections process, the source added.

America should be ashamed to even play and lie about how Russia is able to effect our elections to the point they want you to believe. Are we that weak and security poor?