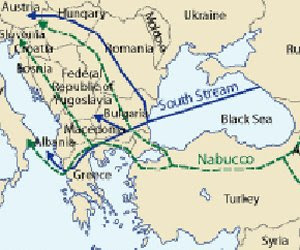 Last week I said that I had heard a rumor that Europe had a huge change of heart with Russia. I guess that I should say Europe wants the Nabucco Pipeline to be built but Russia has the only gas to fill the pipeline. (Oops)

Look at this article from Russia Profile.org

At last week’s Nabucco summit, the European Union took decisive steps by pledging the firmest possible political support for the project, in order to disperse any doubts that its intention to build a pipeline whose sole purpose is to supply Europe with non-Russian gas is indeed real. This week, the story took an unexpected turn. The Director of the Nabucco project Reinhard Mitschek said that the Nabucco consortium was open to Russia’s participation, and was ready to negotiate.

Two days before, it was reported that the European Parliament was considering inviting Russia to join Nabucco, with this proposal included in a report drafted for the EU energy security review.

Looks like I heard correct. This dead in the water pipeline can become useful if Russia supplies gas and they all bypass Ukraine.

Now a few days ago Ukraine has had several articles about the pipelines bypassing Ukraine. Ukraine is hopping up and down trying to get some attention that we are really a good transit country? (I question that!)

I have one thing to say to Ukraine: “Keep politics out of the pipeline transit because it looks like it has caused you to loose the biggest money making part of the Ukraine economy.” My grandma would have said something to the effect of: “They just opened mouth and stuck their foot in!”

Europe wants this pipeline built and Russia really does not want to build South Stream which cost almost twice as much as Nabucco. Both pipelines go basically to the same geographical area and Russia has been saying why compete lets join forces. Europe has just extended the invite.

Lets hope Europe is serious because Europe needs to have a reliable supply of gas. Russia can supply it but Ukraine can not seem to deliver it….