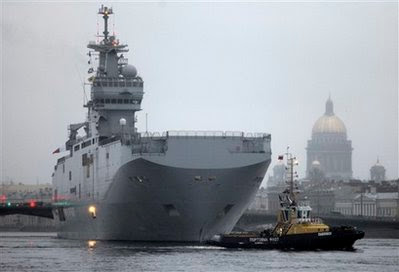 It is fun to watch the Western world get their faces all twisted up in a tissy when Russia does things that are considered bad and evil by Western standards. Even when it is the West that helps do these evil things…

What am I talking about?

The proposed sale of the French navy’s 23,700-ton Mistral-class amphibious assault ship to Russia by a NATO country, France!

This seems to me to be more of a chess game tactic by Putin to obtain a vessel. The actuality is Russia does needs the ship to be able to enhance the fleet and give helper blueprints to produce her own assault ships of said design.
But that said: If Russia does not obtain such a ship, it still will not prevent a future development of said assault ships. So Putin sees a way to increase the Navy now – not later – but in the end run, it will all be the same results…
The West tries to play the issue of a weak Navy by Russia who needs this assault ship to help her! Russia has played well on that part and recently released a statement that riled up America:

The Russian navy’s commander, Vladimir S. Vysotsky, said recently that Mistral ships would be a welcome addition to his aging fleet and that had they been available in 2008, the Russians would have defeated Georgia “within 40 minutes.”

Vladimir Putin, added to the jitters, telling reporters during a visit to Paris in November: “I can assure you that if we purchase this armament, we will use it wherever deemed necessary.” This was on Russian national TV!

Putin has made a chess move…

Putin is playing on the several little known facts:

One, that Germany is a powerhouse of an exporter to Russia. France has caught this idea that Russia can be a good safe customer and is trying to enter the market to get her share of the pie.
Two, he is also playing the NATO issue of enhanced relations and closer ties!
Three, he is playing on the fact that 1000’s of French workers need the sale because the building shipyards are getting close to reducing the work force. There are no orders for these ships and Russia actually has suggested three ships to be bought. That means years of work for French employees…
Russia is not an enemy of Europe, in fact the opposite is true. Russia is a friend to Europe and the more that America gets shoved aside (due to lessoning influence) the more pronounced Europe will see a good Russia! (Is that possible?)
Six Republican senators from America, including John McCain (Ariz.), wrote a letter in December to the French ambassador in Washington, Pierre Vimont, complaining that the sale would be inappropriate because it would suggest that France approves of Russia’s conduct, which the letter called increasingly aggressive and illegal. (Lions, Tigers and Elephants – Oh My!)
Just maybe France does approve! Has America stopped to think about that?
I have thought about it and it is none of my American beeswax if Russia wants to buy an assault ship….