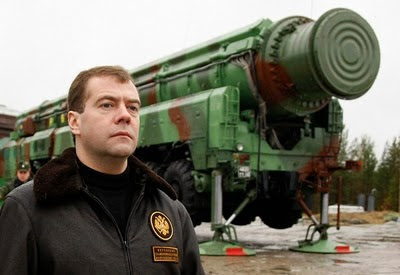 I had a good reader send me a article link that is very important. (Link to the article) I let this article slide because I have all this type of information been constantly fed from the Kremlin website and I just read and tossed aside. I realize that was a mistake… (Some items I still need to address.)

MOSCOW — It’s the near future. Russia is a thriving multi-party democracy with a media free of state control. It has become a member of NATO and is thinking of joining the European Union.

A crazed fantasy? This was the vision put forward Wednesday by a think-tank set up by President Dmitry Medvedev of the path Russia needs to take in the next years.

This is an important change of thoughts in Russia. Putin and Medvedev have this goal and before the release of this information those two had a big meeting and decided the game plan so to speak.

If you look at the sidebar on Windows to Russia. You will see a title called:
Kremlin.Ru: Unified Wire Service:

This is a direct feed that comes from the presidents website in Moscow. This is how I follow the happenings in the Kremlin. You can expect the list to be virtually all new items everyday. That is how active the site has become. Medvedev is very open about what he does and tries to assure that everything gets posted properly. I really only see one area that needs to improve and think that they need to start giving more information about the meetings between Medvedev and Putin. This would help dispel all these rumors about a rift between powers, now and to be! But I really think as the site develops they will start including more about their meetings…

I installed this feed to be visible, for helping on that very reason. So that people in the world could see what the Kremlin is up to! I use to post directly most of these articles, but they are too numerous now and I feel that this way gives you a better choice of links to follow and study Medvedev’s plans for the future…
Russia is a democracy but it will be a democracy done the Russian way. America has already proven that her way of democracy has failed and needs a pivotal revamp.
Strange that the Western world can not see that Russia has big plans with World at large and America is really not in that initial list…
Windows to Russia!
comment always welcome.