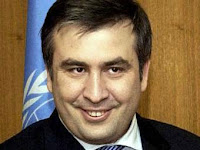 That morning cup of coffee gathered this tidbit of information. Georgian president Mikhail Saakashvili says he won’t run for the position of head of state again and that his current term will be his last. This was stated after a strong opposition to him received blessings from the West….

“This is my last term and I am not going to ballot for president again. Of course, after this I do not intend to die. I and my colleagues believe that the first and most important task of the current government is the peaceful restoration of the territorial integrity of Georgia, and the second is building sound and stable public institutions,” Mikhail Saakashvili said. (Link)

The rumor of blessings from the West is former parliamentary Speaker Nino Burjanadze visited Europe and the U.S. and that the West sent her a clear message: “Georgia is located in the zone of the West’s energy interest, and it cannot allow the country to be governed by a leader who may jeopardize the region’s security.”

Things that make you go Hummmm…