One Thousand and Twenty Years Since the Arrival of Christianity in Russia! 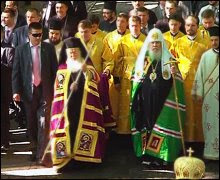 I was drinking my morning cup of coffee and reading about the project that the Orthodox Church has underway. Three new churches are to be built simultaneously and in one day in the Russian, Ukrainian and Belarusian capitals. The remarkable Orthodox project being undertaken in Moscow, Kiev and Minsk marks one thousand and twenty years since the arrival of Christianity in Russia.(Link)

It was said on TV last night that they are using a prefabbed wood block system that will cut the cost by 60%. The cost is estimated at around $50,000 per church. This project is a start toward replacing churches that had been destroyed during the Stalin era.

The Orthodox Church says that it is not the glitter that makes a church but the spiritual hunger that makes a church. So costs will be kept at a minimum. Churches are to be located in areas that are lacking in churches from destruction. The day has not been announced yet for this one day event.

THE JUBILEE OF RUSSIA’S CHRISTENING: For all Orthodox believers of Russia, Ukraine and Belarus July 27th is traditionally a day of remembering the Holy Equal-to-the-Apostles Prince Vladimir.

We are so glad to see the strong revival of the Orthodox Church in the old Soviet areas….