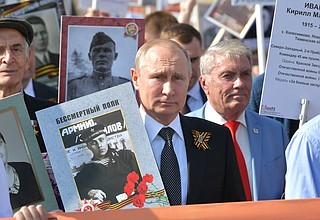 Congratulations on Victory Day, the day of our pride and grief, our boundless gratitude to the defenders of the Fatherland who crushed Nazism.

They are all on the pedestal of the tremendous Victory. It is for this Victory that they fought and laboured, passed that self-sacrificing road of horrendous ordeals, stood up as an unbending stronghold in the fire of the battles, gave everything they could and through suffering they garnered Victory!

With every new year we come to a deeper realisation of the moral power of that unparalleled feat and the eternal value of the military triumph of our people.

It was the people who defended and saved our Motherland, became the hope and a tower of strength for the humankind, the main liberator of European nations.

Our country’s history counts a number of heroic deeds yet the victory over Nazism stands out as retribution to the Nazis for all their crimes, for thinking of themselves as a “superior race” and starting the terrible war.

This insolent force subjugated many nations, and impunity veiled the Nazis’ eyes. They thought they would also be able to conquer the Soviet Union within several weeks – the thousand-year-old historic Russia. They failed.

Yes, after the enemy’s treacherous attack on our territory we suffered defeats, retreats and heavy losses but it did not break Russia‘s spirit.

As early as July 1941, over 5 million soldiers joined the army ranks, tens of thousands of volunteers became militiamen.

Under fierce fire, hundreds of large factories were evacuated to the east, and in incredibly short time manufacturing was resumed in the Urals, in the Volga region and Siberia.

“Everything for the Victory” became the slogan of the home front. This is what marked the opening of our “second front” – the heroic labour front. Its powerful arsenal worked seamlessly.

The victory was forged by the whole nation. The garrison of the Brest tower was the first to take the sudden treacherous brunt of the invaders. The defenders of the fortress fought to the last soldier, they left writing on the citadel’s walls which still make us gasp for air. They sound like an oath and a testament to us: “I am dying but I do not surrender.”

The feats of Russian soldiers today are telling us that this charge has not been forgotten. This oath has been adopted by the current generation of defenders of the Fatherland and is the main guarantee of absolute reliability and invincibility of Russian weapons.

That is exactly what the people thought and how they acted during the Great Patriotic War, as they were fighting for their Motherland in the decisive battles for Moscow and in Stalingrad, at the Kursk Bulge and on the Dnieper River.

The victory was secured with the courage of the defenders of ancient Russian capitals of Kiev and Veliky Novgorod, the fearless defenders of Smolensk, Odessa, Sevastopol, and the infinite fortitude of the inhabitants of the besieged Leningrad.

At each bridgehead and at each military line, feats of tremendous spiritual power were accomplished, often by very young people. More than half of the Heroes of the Soviet Union were under 25.

Many went to the front straight from school and forever remained there, on the front line, never knowing the happiness of love, family, or children.

As soldiers of their country, they did not spare their lives for the sake of its freedom, peaceful future, and each of us. We will never forget their courage and self-sacrifice, and the great price paid for Victory.

We bow our heads in respect before the memory of the sons, daughters, fathers, mothers, grandfathers, husbands, wives, brothers, sisters, fellow soldiers, families and friends. We grieve for the veterans who are no longer with us.

Let us hold a minute of silence.

(A minute of silence.)

The memory of the Great Patriotic War and the truth about it is part of our conscience and our responsibility.

Today, we see how a number of countries are deliberately distorting war events, and how those who, forgetting honour and human dignity, served the Nazis, are now being glorified, and how shamelessly they lie to their children and betray their ancestors.

Our sacred duty is to protect the real heroes. We bow to all veterans from the generation of victors. You live in different countries, but the feat that you accomplished together cannot be divided. We will always honour all of you and glorify Victory, which has always been and remains one for all of us.

The lessons of the past war are still relevant. We have done and will continue to do our best to ensure high combat capability of our Armed Forces, the defence potential of the most modern level, and we will continue to reinforce the prestige of military service and the standing of soldiers and officers, the defenders of the Fatherland.

At the same time, Russia is open to cooperation with everyone who is willing to resist terrorism, neo-Nazism and extremism. Collective resistance to bearers of deadly ideas has become crucial again.

We call on all the countries to become fully aware of our shared responsibility for creating an effective and equal for all security system.

Our nation is well aware of what war is. It brought grief and innumerable suffering to each family. We have not forgotten anything. We remember everything and hold sacred the valour of the soldiers of Victory. Our military parades, the thunder of fireworks and the Immortal Regiment march serve the purpose of honouring them.

Victory Day always brings together and unites all generations, and opens people’s hearts. Today, we are not hiding our emotions, and these sincere feelings are uniting Russia.

We are proud of our unity, and we are glad to have our children and grandchildren with us here, so that we can pass on to them the sacred memory of the heroic accomplishments of our fathers and grandfathers and be confident that their feats and their victories will live forever.

Glory to the victorious nation!

Happy holiday to you!