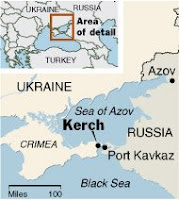 I was drinking my morning cup of coffee & came across this neat article about a bridge from the Crimea to Russia.

This is really a much needed bridge …

Under the project worked out by the Russian design-construction company Spetsfundamentstroy the Crimea-Kuban bridge construction will cost 480 million US dollars. ‘We are working at this project. There is a working group in the nearest time we are considering the project technical-economical grounds. Talks with our neighbors, our strategic partners from Russia are being held. I ordered the Crimean authorities to hold talks next week and to sign the appropriate minutes’ – the prime minister noted. He says the Crimean authorities representatives are going to Russia to consider this question together with the Russian Federation Economic development ministry.

The Vesti channel says the length of the bridge across the Kerch strait will be 4.5 km and its width will be 22 meters. ‘It will enable to have two-way car, railway and pedestrian traffic. Besides the bridge may be the carrier of electric, gas and oil lines, a water pipe’ – Mr. Yanukovich said. He also suggested that the ‘new transport corridor will encourage the Crimea eastern part development’.

Earlier the Crimean authorities applied to the Ukrainian and the Russian Federation authorities to consider the possibility to sign the intergovernmental agreement on the construction of a transport passage across the Kerch strait. The Moscow mayor Yuri Luzhkov made the same suggestion. Under the Crimean ministers council press service the transport passage across the Kerch strait will provide the traffic of up to 10 million people a year.

Some History of the Kerch Strait:

The Moscow mayor Yuri Luzhkov campaigned for a bridge to be constructed across the strait. Construction of an approach was actually started in 2003, provoking the Tuzla Island conflict. Furthermore, the difficult geological configuration of the area makes bridge projects expensive…

When we traveled this last time in April to Ukraine, we crossed the border to Russia at the Kerch Strait. We had to cross by ferry boat and it was a lot of fun! We had pictures of the crossing but of course I broke the hard drive. 🙁

What was neat about it is that our passports got an ocean liner stamp in them. When you cross a International border they stamp your passport with the means that you crossed the border. We have train, car & now a boat stamp. That is Cool!

So I have the feelings of yes they need a bridge but one of the neatest border crossings was at the Kerch Strait, because of the trip by boat across the border…..