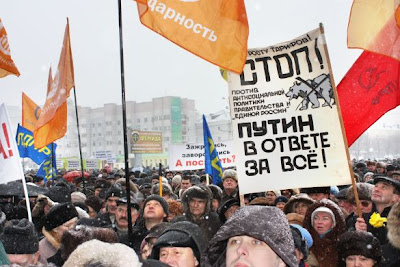 In Russia they say that people can not have a peaceful demonstration!
They say that the police always break it up and arrest people. (Always?)
The real truth is… Yes – you can have a peaceful demonstration and this was proven once again this weekend. In Kaliningrad 6 to 7 thousand people had an uneventful and peaceful protest. The protest was done within the guidelines and permits were gotten ahead of time. In Russia, time and time again there are peaceful protests that never get much, if any coverage!
This protest was over the transportation tax that Putin has upset many with in the whole country. This was the original issue that opposition parties quickly intervened and tried to turn in into a hate Putin issue…

Regardless of opposition manipulations most people in Russia roll their eyes when a choice few like to spout off to Western press.

There was a rally in Moscow that was not sanctioned and they had a hundred out of 300 arrested, including Nemtsov and Yashin, Other Russia leader Eduard Limonov, veteran human rights activist Lev Ponomaryov and Oleg Orlov, head of the Memorial human rights group. (To speak of ones who manipulate!)
In Moscow the common practice is to intentionally not get a permit or mess up the paper work as to not get a permit. Then hold your rally anyway. (By the way – All these illegal rallies are known about way ahead of time. The opposition parties spend everyday telling us when the next illegal rally is.)
So then the police intervene and arrests are made. That way you can get the Western press to notice better…
The big protest this weekend, verily raised an eyebrow in the Western press because it was peaceful and no one arrested for voicing their opinion!
Now the unsanctioned rally in Moscow made headlines everywhere… They love to get their picture taken with the cops, while being carried off and their face is frozen in a shear terror, help me they are going to kill me – Look! (They are great actors)
Ever wonder how these same guys who are arrested 40 times a year, get back on the street and stir up trouble time and time again?
Think maybe it is because as my Grandma said, “Only half of what you are told is true!”
Windows to Russia!
comments always welcome.
PS: I know – which head line sells more papers? Peaceful Rally against Car Tax! or Moscow Arrests 100 People at Human Rights Rally! 🙂