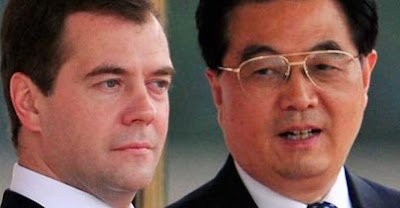 I was drinking my morning cup of coffee & realized that Medvedev has long term connections with China….

Medvedev knows China. For two years he was in charge of a difficult job – organizing the Year of Russia in China and the Year of China in Russia. He had to make numerous trips and conduct many talks. In a way, he closed down the old era in bilateral relations. Now his task is to open a new one. (LINK)

——————————————–
BEIJING, May 24 (RIA Novosti) – Russia’s relations with China are becoming a key factor in the development of international affairs, President Dmitry Medvedev said on Saturday, the second day of his official visit to Beijing.

Medvedev told Jia Qinglin, chairman of the National Committee of the Chinese People’s Political Consultative Conference: “My visit to China is aimed at developing the strategic dialogue that has been progressing over the past few years between our countries.”

“We have achieved major progress. Now Russian-Chinese relations are becoming a key factor in international developments.”

The committee chairman told the Russian leader that his visit to China “will not only help the development of strategic partnership between the two countries,” but also open a new page in the history of their relations.
——————————————–

Looks like a new ballgame is in the works. This is a powerful combination of countries. Medvedev has long and solid ties with China. He goes way back and has a lot of respect in China. These two countries working together will be hard to push around!

Something to think about……