I was drinking my second cup of coffee today and was thinking about the snow outside. Then my eyes caught this tidbit of information about how to handle the credit crises….

Kharkov, Ukraine, borrowed a few thousand dollars in a local bank to buy a Range Rover, but ‘forgot’ to pay back. After a few insistent reminders from the bank debt collecting department he came to the branch to solve the problem, but didn’t manage to get his credit refinanced. Moreover, after the visit he found his expensive car blocked, with all four tires punctured. To get out of the bank’s car park, he had to run over a car that belonged to the branch.

On his next visit, according to Mr Kostenko, for fear of sustaining more damage to his precious vehicle, he arrived on a reconditioned APC purchased at an army sale. The personnel carrier was disarmed and officially registered with local traffic police. The spectacular arrival, though, was not appreciated by the bank workers. They told the extravagant ex-official to finally pay what he owed, and in the other branch – the one that actually worked with private clients. (Link)

My question is where can I get one of these that is street legal? 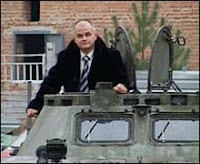 That would be fun and safe.