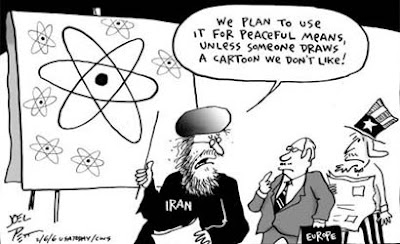 Today while drinking my morning cup of coffee, I was thinking about what I had said over a year ago: http://kylekeeton.com/2007/06/russia-wont-take-much-more-and-i-dont.html This

article was about a time I was upset with the involvement of American politics in Russia. (Boy was I correct!) Russia has reached the point of telling the USA to “BUG OFF”.

Even CNN has got the picture correctly now, I have been impressed with the change of direction in reporting by Time and CNN. They have a ways to go but at least they seem to try to get the truth now. (sometimes) CNN says, “A key meeting of world powers to discuss a fourth U.N. Security Council resolution imposing sanctions on Iran is unlikely because of a Russian boycott, according to a top U.S. official.” This is correct, Russia does not have the time to placate in Iranian witch hunts!

“At the United Nations, Mahmoud Ahmadinejad said countries are turning their backs on “bullying powers.”

And while he insisted Iran’s nuclear activities are peaceful, Ahmadinejad blamed the same powers for seeking to hinder it “by exerting political and economic pressures on Iran, and threatening and pressuring” the International Atomic Energy Agency.

Those powers, meanwhile, are building or maintaining nuclear stockpiles themselves, unchecked by anyone, he said.

As Ahmadinejad spoke, the only person at the United States table was a note-taker; no U.S. diplomat was present. When President Bush spoke earlier Tuesday, however, Ahmadinejad was in the room.

“As long as the aggressors, because of their financial, political and propaganda powers, not only escape punishment, but even claim righteousness, and as long as wars are started and nations are enslaved in order to win votes in elections, not only will the problems of the global community remain unsolved, but they will be increasingly exacerbated,” the Iranian leader said.

He accused the United States of oppressing Iraqis with six years of occupation, saying Americans were “still seeking to solidify their position in the political geography of the region and to dominate oil resources.”” (Link)

In Germany: It’s not a call for assistance; it’s a scream for help. US Treasury Secretary Henry Paulson is asking other countries to help buy up bad US debt. The US government is putting up $700 billion in taxpayer money in the hopes that the measure might restore stability in the financial system. The German government has answered this call quickly and clearly: NO!.

Germany will not be the only one to say, NO! The problem is created and grown in America and by Americans. The world will suffer greatly from the problems now, much less buy more worthless debt and hold more funny money.

I also saw that Bolivia is throwing the fire back at America: At the same U.N. meeting that the Iranian President scorched the USA in, Bolivian President Evo Morales on Tuesday said, “The United States has tried to thwart his political ambitions and, more recently, failed to condemn a pro-autonomy movement that uses “terrorist” tactics.” Morales, in the address to the United Nations General Assembly, described privatization as the cause of the world’s financial crisis, and credited his nationalization of Bolivia’s petroleum industry as a boon to the nation’s economy. (Link)

To end this hodgepodge of an article we will concentrate on the latest words of wisdom from Moscow: “We would like very much that, in Washington, they finally get clear what they want from relations with Moscow,” said Andrei Nesterenko, official representative of the RF Foreign Ministry. as he was commenting on the proposal of the U.S. Department of State spokesman Sean McCormack. McCormack has urged Moscow to put aside all issues where it disagrees with the United States and focus on the fields, where the cooperation is possible, for instance, on Iran.

“If they want to punish Russia, it’s one thing. If they agree that we have common interests to be promoted by joint efforts, that’s another story. But as Rice puts it, “You can’t have it both ways,” Nesterenko pointed out. (Link)

Seems to me that the USA needs to get its “ducks in order” as they say. Russia does not have the time to placate in Iranian witch hunts!