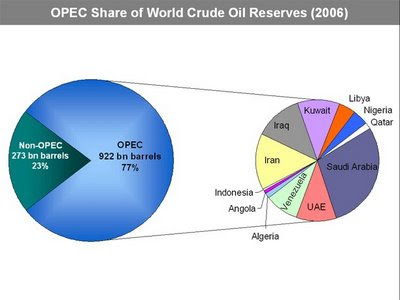 Think if you added Russia to this graph!

I was drinking my second cup of delicious coffee after a long morning walk with the dog. I was thinking about OPEC and Russia! Why Russia was not part of OPEC? To answer that question, it looks like they may become part of OPEC soon. Russia is starting to lean toward that prospect and OPEC is showing open arms.

Russia’s daily oil output stands at around 10 million barrels, or about 12% of (world) global production, very close to the level of leading producer Saudi Arabia. OPEC’s 13 member states are Algeria, Angola, Venezuela, Indonesia, Iran, Iraq, Qatar, Kuwait, Libya, Nigeria, the UAE, Saudi Arabia and Ecuador. The countries account for around 67% of global proven oil reserves and 42% of global oil output. So you see Russia would be a huge increase in the OPEC’s Global standings. It would give OPEC over 50% of Global oil output and over 75% of global oil reserves!

The Organization of the Petroleum Exporting Countries(OPEC) was created in 1960 to unify and protect the interests of oil-producing countries. OPEC allows oil-producing countries to guarantee their income by coordinating policies and prices among them. This unified front was created primarily in response to the efforts of Western oil companies to drive oil prices down. The original members of OPEC included Iran, Iraq, Kuwait, Saudi Arabia, and Venezuela. OPEC has since expanded to include seven more countries (Algeria, Angola, Indonesia, Libya, Nigeria, Qatar, and United Arab Emirates) making a total membership of 12.

OPEC represents a considerable political and economical force. Two-thirds of the oil reserves in the world belong to OPEC members; likewise, OPEC members are responsible for half of the world’s oil exports. The fact that OPEC controls the availability of a substance so universally sought after by modern society renders the organization a force to be reckoned with. (Link)

OPEC has opened it’s arms and has made it clear that they would like to welcome Russia as its member. The respective statement was made by Algerian Oil Minister and OPEC President Chakib Khelil.

I know that Russia is being considered positively and that Russia has been cooperating with OPEC for at least a decade and potential of a new format is very interesting. Russia will be attending the next meeting of OPEC that is slated for December 17, 2008.

So why has Russia not been made a part of OPEC?

Answer: Is that Russia hadn’t officially applied for the membership!