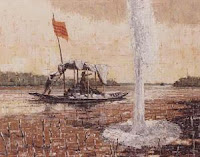 I have watched how Russia uses her press (Russia Today & RIA) and it is very predictable. The press has a few articles that state issues about possible problems with things. (anything) Then as we get closer to the day of reckoning the articles get more to the point. Then what they have hinted at happens. It is like clock work and 95% accurate. I call these articles warning shots like over the bow of a ship on the seas.

In the case of Ukraine this time, about two weeks ago the first article appeared that Ukraine is having issues with collecting money for gas payments. Then the articles appeared about Ukraine cutting back on the amount of gas they need. Then came articles that Ukraine might not be able to come up with all the money. Now, the articles state how the situation can be circumvented. The next articles will be about Ukraine not paying. So on and So on!

So: Medvedev is letting the world know that Ukraine is about to default and once again not pay her gas bills. The message is very clear and Medvedev has come up with a way to help and Russia will lead the way…

Russian President Dmitry Medvedev suggested on Sunday that European financial institutions should create a pool to help Ukraine pay for natural gas supplies and Russia was ready to participate in this process.

“Some analysts say that the economic situation in Ukraine is virtually close to a collapse. If we feel that they are unable to pay, let’s create a financial pool and help them with money. I believe this is a way out of the situation for all. There is a group of European financial institutions and we are also ready to participate,” Medvedev said in an interview with the Spanish media on the eve of his visit to Spain. (Link)

Russian media reports said, citing sources in Gazprom, could again cut off gas supplies to Ukraine if $400 million was not transferred by March 7.

I can promise you that Ukraine is about to go belly up just like Iceland did. Ukraine owes everyone and their brother money.

Don’t say that Russia has not fired several warning shots…