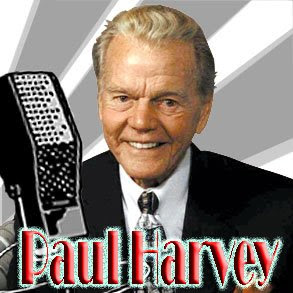 Here in Russia it was not easy to find Paul Harvey on the air in fact it was impossible. So when I moved to Russia I gave up my habit of listening to Paul Harvey everyday on the radio. I switched to the Internet but it never was the same as listening to him live on the air.

I read his book The Rest of the Story,

A joke Harvey passed along to his listeners in Sept. 2007, about an imaginary meeting of David Petraeus and Chelsea Clinton. The President’s daughter asks the General if he’s afraid of anything, and Harvey gives this reply: “I am afraid of three things. I am afraid of Osama, and I am afraid of Obama, and, Ms. Clinton, I am afraid of yo’ mama.”

This was a so typical of Paul Harvey and it is what I loved about him. I remember times that I would pull over to the side of the road in my car and sit and listen to his broadcast. Always around noon he would come on air somewhere in the USA and I did not want to wreck the car while listening.

“Retiring,” he said, “is just practicing up to be dead. That doesn’t take any practice.” He was still broadcasting the week before he died.

Paul Harvey made me laugh, cry, get mad and sit in amazement during his broadcast.

I will miss Him…